Older adults with poor fitness levels have more deterioration of white matter in their brains, according to a new study, compared with their fitter peers. White matter deterioration was also linked with a decline in decision-making brain function among adults with early signs of memory loss, suggesting that regular exercise may slow cognitive decline and perhaps even dementia, say the study authors.

The study, published in the Journal of Alzheimer’s Disease, is not the first to suggest that exercise may help keep the brain healthy in old age. But while previous research has asked adults to self-report their fitness levels, the new paper used an objective test for cardiorespiratory fitness—measuring people’s VO2 max, a measure of how much oxygen their lungs can utilize during intense exercise.

Researchers from the UT Southwestern Medical Center recruited 55 older adults with mild cognitive impairment (MCI), meaning they were starting to show signs of memory problems, and 26 older adults with no signs of MCI. They used imaging techniques to study the white matter in participants’ brains, and measured their VO2 max during a treadmill exercise.

They also performed a series of tests to evaluate people’s executive function, which involves mental skills used for everyday decision-making, problem-solving and planning and executing tasks. Executive function is different from memory, but often, both skill sets suffer in people with age-related cognitive problems.

The researchers found that older adults with higher VO2 max scores—meaning they had better cardiorespiratory fitness—had less deterioration of the white-matter fibers in their brains. This was true in both groups of people in the study, with or without MCI, even after researchers controlled for factors such as age, sex and body mass index.

White matter is comprised of millions of bundles of nerve fibers; it acts as the “computer cables” that connect various parts of the brain, says senior author Rong Zhang, neurology professor at UT Southwestern’s O’Donnell Brain Institute. “If those cables get deteriorated, so do the pathways of communication,” he says.

The researchers also found that, in adults with MCI, white matter integrity was associated with executive function. In other words, the healthier the white-matter fibers, the better people’s scores were on tests for critical thinking and planning skills.

The findings strengthen the long-held hypothesis that maintaining or improving fitness levels in old age may protect the brain, the study authors write in their paper—even in people at high risk for Alzheimer’s disease. “That’s exciting, because the field right now is challenging,” Zhang says. “Even though we suspect it, there hasn’t really been any conclusive evidence that exercise can have an impact on the development of dementia.”

Last year, the National Academies of Sciences reported that, despite advances in understanding dementia, the evidence on treatment and prevention interventions “remains relatively limited and has significant shortcomings.” The idea that increased physical activity may delay or slow age-related cognitive decline is supported by “encouraging but inconclusive evidence,” the report concluded.

MORE: What Type of Exercise Is Best for the Brain?

Many experts believe that maintaining physical fitness can help keep blood flowing normally to brain tissue, which can reduce the risk of damage or deterioration. Animal and human studies have also shown that aerobic exercise stimulates the release of growth hormones that may also improve brain function. In 2013, Zhang’s team found that messages are more efficiently relayed between brain cells in older adults who exercise, compared to those who are sedentary.

Zhang says that the new study was too small to inform any definite conclusions, and that it does not answer questions about how much or what types of exercise might be best for older adults. Because it was observational, it was only able to show an association between fitness levels, white matter integrity and executive function—not a cause-and-effect relationship.

For those reasons, his team is now involved in an ongoing five-year trial involving more than 600 older adults at high risk for Alzheimer’s disease due to family history and other factors. The research, which is taking place at six medical schools around the country, aims to determine whether specific exercise routines—paired with medications to lower blood pressure and cholesterol—can reduce the risk of dementia.

“It makes sense that’s what’s good for the heart is good for the brain,” says Zhang. “I don’t think we need sophisticated science to make that point, but we do need more studies to make evidence-based recommendations about what strategies work best. And in a couple of years, I’m positive, we should have that sort of evidence.” 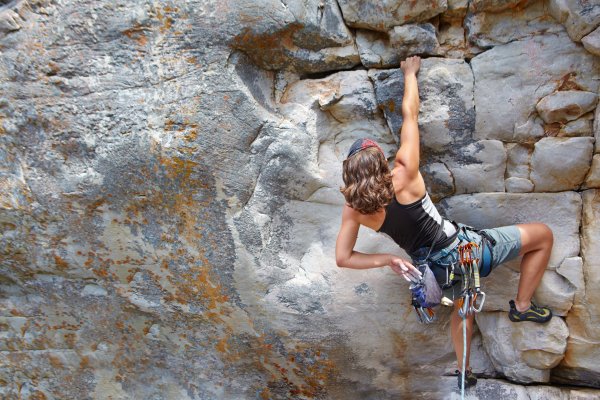 Why Rock Climbing May Be the Ultimate Full-Body Workout
Next Up: Editor's Pick