'They Remind Me of Ballet Dancers.' Mr. T Tells Us Why He's Obsessed With Olympic Curling

So, Mr. T, let’s get this right out of the way: do you pity the fool who pokes fun at curling?

“We won’t pity them right off,” Mr. T tells TIME in a telephone interview from his home in Southern California. “We’ll forgive them, you know? They really don’t understand. It’s harder than it looks. It takes practice to make it easy like that. Because I’m seeing in my mind, ‘boy, you don’t want to think about the stone too hard, and forget your grippin’, hurt your knees. So it’s a lot of strategy to make it look smooth. They remind me of ballet dancers. We see the ballet during the concert. We don’t see the practicing and training and timing. See what I’m saying?”

As the world enjoys its quadrennial fascination with curling at these 2018 PyeongChang Winter Olympics, the sport has gained an unlikely ally: one of America’s favorite tough guys, Mr. T. While watching Olympic curling on a recent evening, Mr. T, born Lawrence Tureaud, fired out a series of tweets in support of the sport that became viral hits.

“I like curling, it’s less wear and tear on the body,” Mr. T wrote in one tweet. “I wrestled, boxed, and studied martial arts. I have nothing else to prove. Therefore I choose curling. #curlingiscoolfool”

Like many newfound curling fans, Mr. T is hooked (though he points out that he’s not sitting around all day watching the sport; he has some projects in the works that he’s not quite ready to disclose).

But like many viewers, he doesn’t totally understand the scoring system.

“I’m learning,” says Mr. T. “It’s like in school. First you’re in kindergarten, you learn your ABCs, learn your nursery rhymes. As you go the lessons get a little harder. Then you get the whole test.”

Matt Hamilton of the United States slides a stone in the Curling Mixed Doubles Round Robin Session 1 during the PyeongChang 2018 Winter Olympic Games at Gangneung Curling Centre on February 8, 2018 in Pyeongchang-gun,
Ronald Martinez—Getty Images

Read more: Everything to know about curling for the Winter Olympics

He loves to see the curlers sweep the ice in front of the stone, which lessens friction and allows the stones to slide further down the ice. “It reminds me of my Super Sweeper,” Mr. T says with a laugh. “I said, man, I wonder if anybody’s little broom has ever broken when they’re trying to sweep.”

He really can’t fathom how sweepers avoid touching other stones as the shots slide toward the “house,” the dartboard-looking scoring area. “That’s amazing!” says Mr. T. “Sometimes when you go the bullfight, you want to see the bull score a little bit. You don’t want the matador to win all the time. So man, I want to see a sweeper hit the stones. But they don’t. That’s a skill. Wow!”

Switzerland's Peter De Cruz throws the stone during the curling men's round robin session between Switzerland and Italy during the Pyeongchang 2018 Winter Olympic Games at the Gangneung Curling Centre in Gangneung on February 14, 2018.
WANG ZHAO—AFP/Getty Images

Mr. T insists no curling organization is paying him to tweet about the sport —or to compare it to both ballet and bullfighting. He just fired out some stray observations, and the reaction has genuinely surprised him. But Mr. T does want to hit up a curling club to throw some stones.

“Do they have a senior citizen’s circuit? For curling?” Mr. T asks. “I said to myself, ‘T, you’ve got to remember, you are 65, man.'” He’s afraid of slipping on the curling ice — or “sheet.” “Man, wow, I’m not wimping out, but you don’t want to get out there and hurt yourself,” he says. “I have to make sure I’m all padded up. I’ll have my wrist guards, my knee stuff, my ankle stuff. It might look like I’m coming to play football. But I’ll just be ready to curl.”

Mr. T, don’t fret: curling shoes come with grippers that give you traction on the ice.

When asked to name the potential best curler on the A-Team — the hit 1980s television show that made Mr. T, with his signature mohawk and mounds of gold chains, a star — Mr. T said “Face,” played by Dirk Benedict, because he was in the best shape. Mr. T agreed that his character, B.A. (“Bad Attitude”) Baracus, would be the worst.

“No doubt about it,” says Mr. T — he’d throw the stones too hard and beat up his Canadian and Norwegian opponents. “I would have gotten in my van,” Mr. T says, cackling uncontrollably, “and crashed through the rink.” 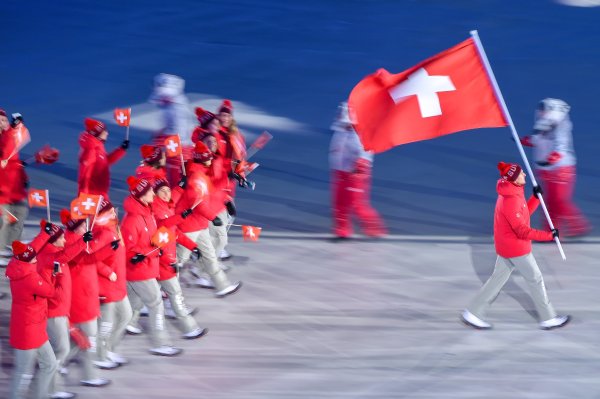 The Olympic Norovirus Outbreak Has Spread to Athletes
Next Up: Editor's Pick