An assistant football coach is being hailed as a hero after he was fatally shot while trying to protect students during the shooting at Marjory Stoneman Douglas High School on Wednesday.

Aaron Feis, who was also a security guard at the school, stepped in front of students to shield them from the active shooter, but did not survive his injuries, according to a tweet from the Florida high school’s football team.

Broward County Sheriff Scott Israel confirmed Feis’ death at a press conference on Thursday and said he coached with him and his sons played football for him.

“The kids in this community loved him. They adored him. He was one of the greatest people I knew. He was a phenomenal man,” he said during a news conference Thursday. “When Aaron Feis died, when he was killed — tragically, inhumanely — he did it protecting others. You can guarantee that because that’s who Aaron Feis was.”

Feis is one of the first victims named in the shooting that killed 17 people. Nikolas Cruz, 19, is charged with 17 counts of premeditated murder. Cruz allegedly used an AR-15 semi-automatic rifle with multiple magazines in the shooting.

Feis was an alumnus of the school and played football there as a student, graduating with the class of 1999, according to the school’s website. He spent his entire coaching career there and also acted as the college recruiting coordinator for the team, the website says.

Coach Feis leaves behind one daughter and his wife in Coral Springs, Fla., according to the school. 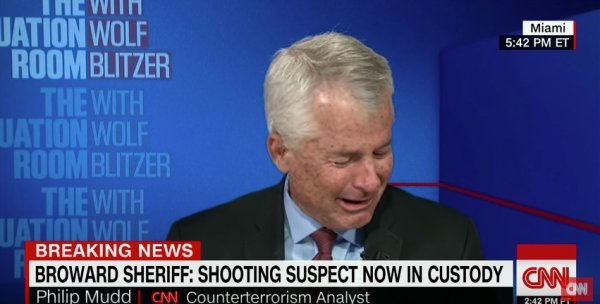 'I Can't Do It, Wolf.' Veteran FBI Agent Breaks Down on CNN Over Florida School Shooting
Next Up: Editor's Pick