Many Mass Shootings in America Have 1 Thing in Common: AR-15 Rifles

Six of the 10 deadliest mass shootings in the U.S. over the past decade have used an AR-15-style semi-automatic rifle. The latest instance was Wednesday’s high school shooting in Parkland, Florida, which left 17 dead and 14 others injured.

The gun used in the shooting was a Smith and Wesson M&P AR-15, federal law enforcement officials told the Associated Press. The same model weapon was used in previous mass shootings, including the Aurora, Colo., movie theater shooting that claimed 12 lives and the rampage in San Bernardino, Calif., that claimed 14.

These rifles and other versions of the AR-15 are the civilian equivalent of fully-automatic M16 rifles used by the U.S. military since the Vietnam War. They are fancied by gun owners because they are typically easy to purchase — often for less than $1,000 — and can be customized with a number of accessories, such as bump stocks, which essentially convert the semi-automatic weapons into fully-automatics. A bump stock was deployed by the assailant in the 2017 Las Vegas shooting, which left 58 dead, making it the deadliest mass shooting in modern American history.

Up until that point, the country’s deadliest mass shooting had occurred just a year prior at the Pulse nightclub in Orlando, where the perpetrator used an SIG MCX semi-automatic rifle — highly similar to AR-15s in aesthetic and purpose — to kill 49 people. Comparable weapons were also used at Sandy Hook Elementary School (27 dead) and a Sutherland Springs, Texas, church (25 dead).

The high number of fatalities in these incidents highlight how AR-15-style guns, much like their M16 cousin, are capable of inflicting serious damage to a number of people at once.

“For practical purposes, for the person that’s just tuning in, the non-gun owner, it’s a very similar type of firearm,” Rob Pincus, who has made a career out of training armed professionals, told TIME.

A debate over whether civilians should have access to these weapons has been ongoing for years. In 2013, in the wake of the Sandy Hook shooting, an assault weapons ban was introduced in Congress, but was struck down by a vote of 40 to 60. It would have barred the “sale, transfer, manufacturing and importation” of customizable semi-automatic rifles like the AR-15. 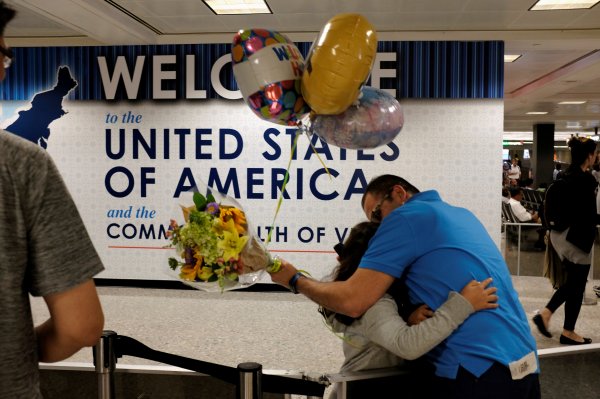 Trump Loses Another Appeals Court Ruling on His Travel Ban
Next Up: Editor's Pick