The Photographer Behind This Unforgettable Sandy Hook Photo Looks to Florida and Asks, What's Changed?

Shannon Hicks was on deadline. The associate editor of The Newtown Bee was at her desk in the editorial department on Feb. 14, preparing stories for this week’s print edition. Hicks has a pair of computer monitors on her desk. On Wednesday afternoon, the screens became portals into the latest mass shooting to grip America.

Hicks was first alerted by a Facebook notification that took her to the group page of the Newtown Action Alliance, a grassroots organization that advocates for a reduction in gun violence and sprung up in the wake of the Dec. 14, 2012, shooting at Sandy Hook Elementary School. That day, a gunman stormed the school and sprayed bullets—into walls covered in drawings, small bodies that sought safety and the bigger ones that shielded them. The alert on Wednesday pointed Hicks to a shooting in Florida, and included a live feed from WSVN-TV, which serves Miami and Fort Lauderdale.

Five years and two months separate Sandy Hook—which left 20 students and six adults dead, not including the gunman or his mother—and Wednesday’s massacre at Marjory Stoneman Douglas High School in Parkland, Fla. By evening in Parkland, at least 17 people were dead. The suspect was identified by authorities as Nikolas Cruz, a 19-year-old former student. His weapon of choice, authorities said, was an AR-15.

“It literally hurts every time I hear about a mass shooting. My stomach tightens, and my breathing gets shallow,” Hicks says. After receiving a request for an interview, Hicks wrote that she would answer questions through email. On her own, she began jotting down notes while watching the news. “I can’t help but think back to the Friday morning that everything changed,” she says. “Everything that happened within the first few hours of that shooting starts replaying in my head.”

Hicks arrived at Sandy Hook just before 10 a.m. after hearing a mention of gunshots on a police scanner. Frantic parents searched for their children and Connecticut state troopers said the scene wasn’t secure as she began to photograph what was unfolding around her.

Ten minutes after her arrival, Hicks focused on a line of more than a dozen children being led away from the bloodshed by authorities. Her image captured not just the raw emotions of the students, but plainly illustrated how young and innocent the victims would be at a time when so little information was known. This wasn’t a repeat of the murders at Virginia Tech in 2007 or the killings at Columbine in 1999. It was mass murder at an elementary school, a depravity of its own kind.

She gave the memory card storing her images to a Bee reporter to run back to the office. Her editor waded through a first batch of pictures and picked out the now-iconic photograph. At the office a short while later, she went through the full set and selected other pictures that were released.

Hicks, who says she ignores the truthers and hoaxers that spam her inbox (“they are not worth my time”), says she sought professional counseling just prior to the third anniversary of the Sandy Hook killings. “I was always angry, snapping at people for nothing, keeping everything inside me,” she recalls. “There were a few things in my personal life that were bugging me, so it was time to talk to someone.”

On her drive to work each morning, Hicks passes a cemetery where at least one of the children is buried. There are also the homes of three families whose sons or daughters were killed; the park where satellite trucks gathered for news conferences; the firehouse where the families of the dead found out they weren’t coming home; the spot where she pulled over to let a police cruiser pass her as it responded to the shooting; even the driveway to the old elementary school, which was razed and later rebuilt.

“I still can’t stop thinking about that day, and much of that has to do with still living and working in this town,” she writes. “Sometimes I envy those in the media who go into a town or city to cover a story but then leave once their reporting is done. They aren’t surrounded by reminders like this.”

Now there’s a grim familiarity of seeing stunned children fleeing a school after bullets fly, with that scene replaying dozens of times across television networks in the hours after the gunfire. In Newtown, Hicks recalls, the gunfire had stopped and the suspect was dead by the time media helicopters arrived. Her photograph of children being guided from the school by officers, most with their hands on the shoulders of the peer in front of them, was the image that entered shared memory.

This week in Parkland, the perspective of a massacre shifted. One student tweeted images from his classroom of students trying to hide behind desks. Another student uploaded shaky footage to Snapchat that showed peers cowering on the ground, as well as a photo of apparent bullet holes in a laptop screen. As a killer wandered the halls, teenagers tapped into their social networks to alert the masses or say goodbye.

“They were comfortable enough to use the technology at their fingertips to let the world know what things looked and sounded like for them,” Hicks says, “even as they realized that this was not in fact another drill.”

At close to 6 p.m. on Wednesday, Hicks wrote to say she had been watching the local broadcast from Miami for about three hours. “The scenes are so familiar, again and again: police and other first responders, the fire and ambulance crews, students leaving a building—many with their hands held up—and then the arrival of the media and ongoing reporting,” Hicks says.

She will often hear from family members and friends after a mass shooting: phone calls, texts, maybe a message through Facebook. At 7 a.m. on Thursday, Hicks says, her phone pinged. A former co-worker sent a text: “You OK?” 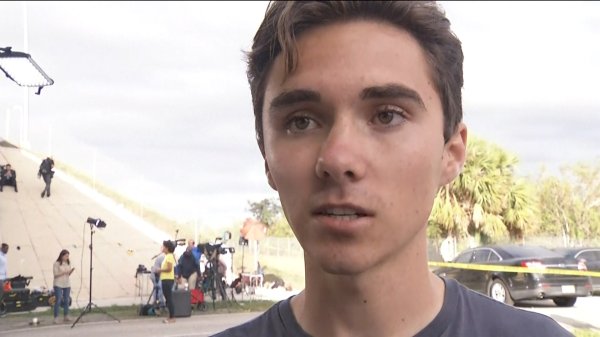 A Student Started Filming During the Florida School Shooting. He Hasn't Stopped
Next Up: Editor's Pick