As soon as Germany’s Aljona Savchenko and Bruno Massot finished the performance that set a new record for the highest score of all time for the pairs long program, they collapsed in triumph. It also marked the first time in more than 50 years that Germany took home a gold in pairs figure skating.

The energetic and teary-eyed duo set an emotional tone early on. But it was the final moment, when cameras captured Savchenko falling into a loose embrace with her partner after the duo’s outsize performance, that was the most breathtaking.

Achieving that 159.31 score was one of the most impressive feats of 2018 Winter Olympics so far, and it was a long time coming for the skaters. Savchenko skated in five Olympic Games for two different countries and with three different partners before tasting this victory. This time, after earning two bronze medals at previous Olympics with a different partner, Savchenko finally got her first gold. “I never give up. I keep fighting,” she told TIME.

Watch their final moment below. 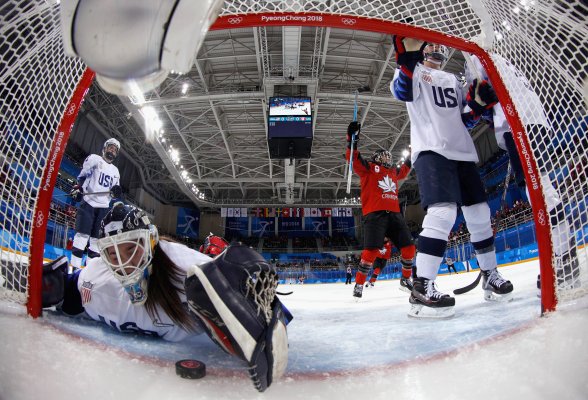 Why the USA vs. Canada Women's Hockey Rivalry Isn't Over Yet in PyeongChang
Next Up: Editor's Pick