It’s the beginning of the end in South Africa. Or the end of the beginning. Either way, scandal-plagued President Jacob Zuma is on his way out after eight years in power. After he resigned on Feb. 14 amid attempts by the ruling African National Congress (ANC) party to dislodge him, one thing is clear: South Africa is ready to turn the page. And given how abysmally run the country has been over much of the past decade, that’s unqualified good news.

Compared with other countries whose economies are fueled by entrenched patronage networks, South Africa is much more pluralistic. Information about corruption at the top political levels is readily available, so few South Africans will be unaware that Zuma still faces 783 corruption, fraud, racketeering and money-laundering charges relating to a pre-presidency arms deal. In that respect, South Africa is much like Brazil, which is undergoing its own political convulsions. And like Brazil, South Africa will emerge all the stronger for it. Strong rule of law and a robust media environment can cause short-term political chaos but often prove steadying in the long run.

The one leading the charge against Zuma is fellow party member Cyril Ramaphosa, who was elected as Zuma’s replacement as president of the ANC in December. To do so, he had to defeat Zuma’s ex-wife Nkosazana Dlamini-Zuma. Once elected, Ramaphosa worked quickly, strategically sidelining Zuma from major decisions like whom to appoint to the new board of state-owned power utility Eskom. Moves like this telegraphed to Zuma’s remaining allies in the party that if they wanted to keep their standing in the party (and their plum positions in government), they should start rethinking their allegiances.

The party of Nelson Mandela, the ANC has won every nationwide election since the end of apartheid, a feat that makes Ramaphosa the heir apparent to Zuma, and also likely to lead the country after the 2019 election. This gives him a year to clean up Zuma’s messes before he and the ANC have to run in elections again.

But make no mistake–Ramaphosa is no perfect politician, and his ascent to the presidency won’t suddenly cure South Africa’s long-standing woes. He is, however, a committed reformer, devoted to reducing the country’s systemic corruption and getting its sputtering economy back on track. We’ve already seen big spikes on rand valuation and market optimism as a change in South Africa’s political guard becomes more likely. That’s entirely appropriate.

For Ramaphosa, his biggest appeal is that he’s not Zuma. For markets and investors, that’s enough. 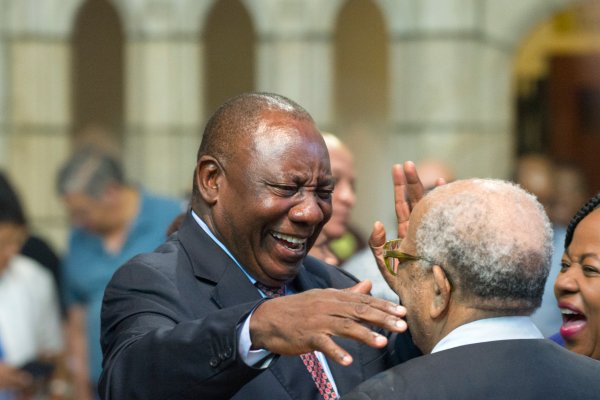 Cyril Ramaphosa Set to be South Africa's New President
Next Up: Editor's Pick