Skating Sensation Nathan Chen Begins His Quest for Gold in the Men’s Short Program Tonight. Here’s What to Watch For

The figure skating men take to the ice tonight (or morning in PyeongChang time) at the 2018 Winter Olympic Games and they are hoping for a better showing than the rough start they got when they opened the team event last week.

This time, 30 figure skaters will be competing for the top three places on the podium, and the placements are determined by a combination of a loose seeding system and a draw. The top medal contenders are skating in the last group of six, which only ups the tension and likely will get everyone’s adrenaline running; it includes Japan’s Yuzuru Hanyu, the reigning Olympic champion, the U.S. national champion Nathan Chen, who is undefeated this season and the only skater to beat Hanyu, OAR’s Mikhail Kolyada and Hanyu’s teammate Shoma Uno.

Hanyu is first to skate among the six, and that means Chen can see what Hanyu does to determine how aggressive Chen needs to be to win the gold. Hanyu injured his ankle while practicing a quadruple jump last November and pulled out of all major competitions since then. His coach, Brian Orser, said he was back to a full schedule of training, but all eyes were on Hanyu when he went through some abbreviated training sessions after arriving in Korea this week. At his first session, he only attempted single jumps and at his second, he landed two quad jumps but didn’t do an intensive run through of his long program.

If Hanyu decides to scale back on his jumps in the figure skating short program, then Chen has the option of either doing the same and hoping he earns him enough points to keep him in medal contention for the long program the next day, or he can skate lights out and put more distance between himself and Hanyu.

In the team figure skating event, in which Hanyu did not participate because he was still training at home, Chen had a disastrous short program, finishing fourth after he stumbled on the first quad jump combination and popped another quad jump before falling on the triple axel. If Hanyu, still recovering from his injury, shows any sign of downgrading his planned elements, Chen might consider doing the same, in order to save his strength for the final part of the Olympics figure skating competition on Saturday.

But Hanyu isn’t the only competitor Chen needs to worry about. Hanyu’s teammate Shoma Uno, the only medal-contender to skate cleanly during the team competition earlier this week, also has two quad jumps planned in his short figure skating program. If Chen wants to cement his chances for gold, he may need to put blinders on and skate the way he did in his undefeated season — and just focus on all those points he’ll rack up if the he lands those quad jumps cleanly. 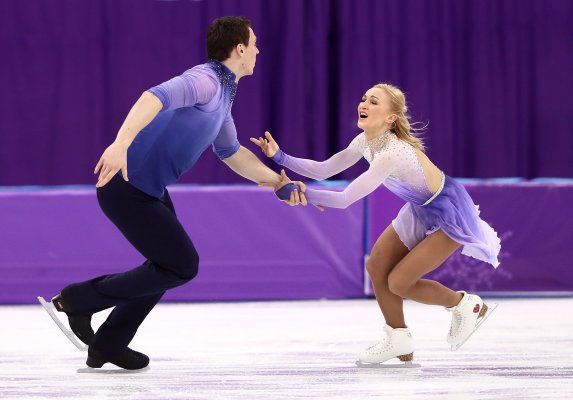 Germany Wins Its First Gold in Pairs Skating in More than 50 Years
Next Up: Editor's Pick