'A Game Changer.' How a Painting of President Obama Broke the Rules

A Kehinde Wiley portrait is never hard to spot; bursts of jewel-tone colors, Rococo floral swirls, and, usually, a black or brown person as the subject. His depiction of Barack Obama is no exception. In the grand 7-by-5-ft. painting, unveiled in a ceremony at the Smithsonian Institution’s National Portrait Gallery on Feb. 12, Obama is seated in an ornate brown chair, his arms folded neatly across his lap. Bright green vines illuminate the background; buds of lilies, chrysanthemums and jasmine are peppered throughout. He practically levitates amid the verdure. The image is a striking departure from the staid presentation of many of the other 43 Presidents in the “America’s Presidents” exhibit. And for that reason, it feels like an essential addition to American history.

The exhibit is curated in chronological order, but depending on how you enter, it opens with either George Washington or Obama. Like the historic Lansdowne painting of Washington, Obama’s portrait is rife with symbolism. But where Gilbert Stuart flirts with the splendors of the office of the President, Wiley alludes to the story of the man himself. “The way we think about a presidential portrait is one that is imbued with dignity from the outset. It is a vocabulary that has been fixed,” Wiley tells TIME. “The challenge here was to allow certain aspects of Barack Obama’s power and respectability to be a given so that we could move forward with a different type of narrative.”

Wiley stripped away the trappings of office in order to depict the former President’s life journey. African blue lilies are a nod to Obama’s father’s home country of Kenya. Chrysanthemums are the official flower of the city of Chicago, where Obama met his wife Michelle and started both his family and political career. Pikake, or Arabian jasmine, thrives in Hawaii, where the President spent much of his youth. These botanicals are a challenge to viewers to grapple with the improbability of Obama’s rise. The way the president appears to lean toward the viewer, his collar unbuttoned, exudes a level of openness not seen in some of the other portraits, says Taína Caragol, who curated the Wiley commission for the Portrait Gallery. It’s “indicative of the values of his presidency,” she says, “And the notion of a democracy that works from the bottom up instead of from the top down.”

For the first time in its 56-year history, the National Portrait Gallery commissioned two African-American artists, Wiley and the Baltimore-based artist Amy Sherald, who created Michelle Obama’s portrait, to paint the First Couple. The Gallery raised $500,000 in private funds from benefactors including Steven Spielberg and Kate Capshaw, Judith Kern and Kent Whealy. A spokesperson for the Gallery would not discuss the artists’ fees or how the price compared with previous commissions.

The Obamas chose Wiley and Sherald after considering portfolios of some 20 artists. The Obamas interviewed a few at the White House, but ultimately decided on the two contemporary portraitists with whom they each felt a connection. Both artists’ work shows a commitment to making portraits of people who have traditionally been marginalized. Sherald, 44, typically paints subjects in ordinary clothes, holding everyday poses, but their features are striking, their skin tones are rendered in shades of gray, with pops of color throughout the canvas. Wiley, 41, is known for larger-than-life riffs on Western art. In their portraits, Sherald and Wiley both upend notions of what it means to hold power, particularly as a person of color in America. “Portraits are about revealing aspects of an individual,” says Wiley. Through his art, Wiley bestows the honor and symbols that have traditionally been reserved for the upper class upon everyday people. He says, “allowing us to look at people that are often invisible in a different light.”

Wiley’s paintings often replace white aristocrats and dignitaries with black and brown people—subjects he seeks on the streets of major U.S. -cities—-in clothing like hoodies, combat boots and do-rags. In Napoleon Leading the Army over the Alps, his version of the French general dons camouflage, Timberland boots, a white T-shirt and a bandana. Wiley has also been commissioned to paint musicians as nobility. In Equestrian Portrait of King Philip II, Michael Jackson (the King of Pop) sits atop a white steed as a pair of cherubs adorn his head with a wreath.

The motifs are informed by Wiley’s life. He was born in Los Angeles in the late ’70s and raised by a single mother as the hip-hop era began to take shape. Though the family didn’t have much in terms of money, his mother immersed him in art. On weekends as children, he and his twin brother would travel by bus to classes at a conservatory on the campus of California State University, Los Angeles. When Wiley was around 12, he was among a group of 50 students who traveled to Russia to study its language and art. He went on to study at the Art Institute of San Francisco and earned a master’s degree in painting at Yale. Like Obama, Wiley grew up without his father and traveled to Nigeria to meet him later in life—a parallel between artist and subject that was not lost on either man.

In a speech at the unveiling ceremony, Obama said that he has always been struck by the way that Wiley’s portraits confront notions of power and privilege—Wiley takes “extraordinary care and precision and vision in recognizing the beauty and the grace and the dignity of people who are so often invisible in our lives and put them on a grand stage, on a grand scale.” The President joked that while the artist’s impulse may have been to elevate him (Wiley has painted more than a few of his subjects on horseback), “I had to explain, ‘I’ve got enough political problems without you making me look like Napoleon.’”

“You don’t hire Kehinde Wiley to have a tame painting,” Wiley says with a laugh. “I think in a sense he sort of got what he was asking for.” But the effect the portrait has on the “Presidents” exhibit isn’t lost on the artist: “It was a bold move,” he says.“This painting stands out as a game changer, really. And I think that’s in keeping with the type of bold leadership and authentic voice that this President gave to this nation.”

Though lesser known than Wiley, Sherald is a rising star. In 2016 she became the first woman to win the prestigious Outwin Boochever Portrait competition, beating 2,500 other entries. She was also recently awarded the High Museum of Art’s David Driskell Prize. As with Wiley, Sherald’s approach to the First Lady’s official portrait was true to her artistic method. Obama is styled in a Milly dress that reminded Sherald of the patterns of Gee’s Bend, a black community in Alabama famous for its brilliant quilts. Obama represents an ideal, says Sherald: “a human being with integrity, intellect, confidence, and compassion. And the paintings I create aspire to express these attributes—a message of humanity.”

In Sherald’s portrait, the former First Lady’s silvery skin glows against a pale blue backdrop. Where Wiley’s piece is exuberant and lush, Sherald’s is spare, casting the First Lady as the focus. The singularity of the piece asks the viewer to contemplate the strength and presence of Michelle Obama both as she was in the White House, and as she remains in the hearts of the many who look up to her.

Even days after the big reveal, the portraits have continued to generate conversation. Patrons have been lining up to view the portraits in person. Digital versions of both paintings have flooded social media feeds and news sites. Caragol says that while there has been a widespread embrace of the uniqueness of the artwork, she believes many will be challenged by their unconventional nature. To really see them, she said, will require the viewer to think about portraiture in a fresh way.

“Systems of representation are interesting because they surround us to the point of making us take them for granted,” Caragol says. “So many things could be seen differently and yet we don’t know because we’re just used to seeing them the way they are.” In a sense, the election of Obama did that to the office of the presidency. It seems fitting that his official portrait illustrates that too. 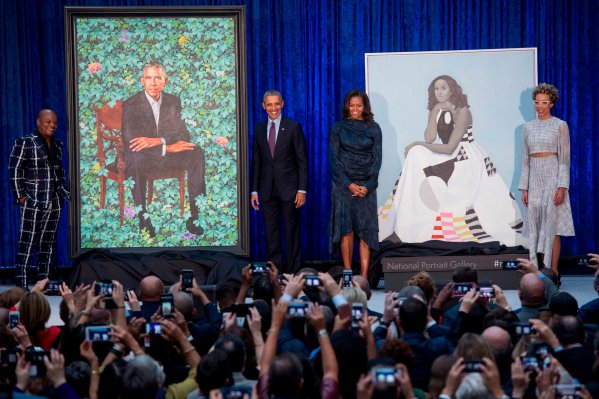 Three Things to Know About Kehinde Wiley, the Artist Behind Barack Obama's New Portrait
Next Up: Editor's Pick