The 2018 Winter Olympic Games in PyeongChang, South Korea are off to a historic start this year as 2,925 athletes from 92 countries compete — marking the biggest representation for the winter event. Olympic athletes from around the world have already glided to victory, with a number of medals already awarded. Others are still waiting to compete on winter sports’ biggest stage.

A number of Olympians this year have the chance to debut in four new events added to the Winter Olympic sports lineup for the 2018 Games, ranging from curling to snowboarding. While the new curling event has already concluded with a gold medal-winning pair, Olympic fans still have a chance to cheer on athletes yet to go for gold in their new Winter Olympic event.

Here’s what to know about the new Winter Olympic events on the sports lineup for 2018:

Snowboarding’s power at the Winter Olympics just keeps getting bigger. Following the addition of the slopestyle event at the 2014 Games in Sochi, the IOC approved the new big air program for the PyeongChang Winter Olympics.

In the event, snowboarders drop in on a ramp and speed down to a jump, where they will launch off and, as the event name suggests, get big air. Like other events in snowboarding, athletes are judged on a scale from 1 to 100, and they will be critiqued on the difficulty of the tricks they perform, their execution, the amplitude and their landing. Riders get two chances to show off in the qualifying rounds, and three attempts in the final round, where the best two scores will be added together to determine the medalists.

Canada’s Mark McMorris and Max Parrot are expected to land on the podium, and the U.S.’s Chris Corning is hoping to get there as well. The U.S.’s Jamie Anderson already won gold in the slopestyle event, but will join the U.S.’s Hailey Langland and Julia Marino, as well as Austria’s Anna Gasser, in an attempt to medal.

Like mixed doubles curling, men and women will join forces in the alpine skiing team event.

Sixteen teams composed of two men and two women from each country will race down a slalom side by side in a single-elimination event—a new discipline added to the Winter Olympic sport this year. The racing format differs from others seen in the sport, which largely focus on the individual. The head-to-head race alternates between woman-man-woman-man, and the winners of each heat move on to the next round.

This event debuted at the FIS Alpine World Ski Championships in 2005. The alpine skiing team event at the Olympics will take place Feb. 24.

Twenty-four long-track speedskaters will compete on the ice all at once as part of a new event added to this Winter Olympic sport. The additional event, intended to bring excitement to the long-track scene which typically has two racers per heat, has athletes race 16 laps around a 400-meter ice track.

The race also includes four sprints sprinkled throughout the event where athletes can earn points. The top three finishers of the event will earn medals, and the standings for the remaining athletes will be determined in part by those points.

As noted by Joey Mantia in an interview with NBC Olympics, the event aims to bring more excitement to the sport as spectators can see the athletes head-to-head on the ice, rather than compare their times completed in different heats.

“There is no waiting for 25, 30 minutes to see who else is going to do the time trial and how is it going to unfold,” said Mantia, the current world champion in the mass start event.

Canadian curlers Kaitlyn Lawes and John Morris already won a gold medal in the new mixed doubles event for curling at the 2018 Winter Olympics. Curling teams are composed of one man and one woman who compete with six stones and eight ends per game — making the event a bit faster moving than others in the sport, which typically have eight stones to throw with 10 ends.

The sport of curling was officially added to the Winter Olympic program in 1998, and its popularity among viewers of the Games took off from there. The International Olympic Committee officially added mixed doubles to the program in 2015 due to the sport’s continued popularity, according to NBC Olympics.

Canada’s Lawes and Morris beat Switzerland’s Jenny Perret and Martin Rios, the reigning mixed doubles world champions, in the event’s first-ever gold medal match at the Olympics. Though Canada’s team wasn’t an easy gold-medal favorite in the new event, Canada’s victory in the sport is no surprise. Its men’s and women’s teams have medaled every year in the sport at the Olympics since curling officially debuted in 1998. 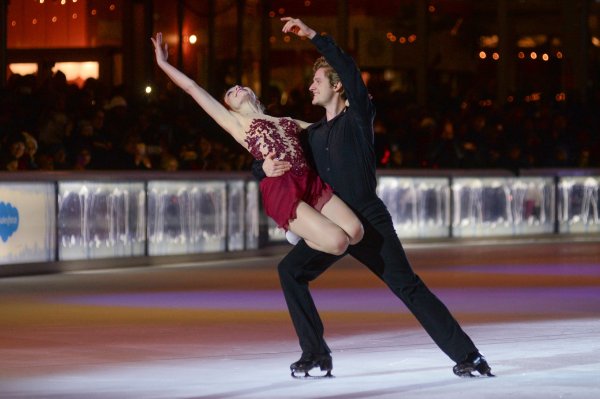 How to Watch Ice Dancing Like a Pro, According to These Olympic Champions
Next Up: Editor's Pick