Why Olympic Medalists Get Stuffed Animals When They Win

If you’ve tuned in to the 2018 PyeongChang Winter Olympic Games this month, you may have been confused to see winning athletes being handed not medals, but stuffed animals. Here’s what you need to know about why Olympic medalists are getting stuffed animals when they win.

Why don’t the Winter Olympics winners get their medals right away?

Viewers of the Summer Olympics may remember winners getting medals shortly after completing their events. But since there are fewer events in the Winter Olympics, organizers are able to hold a medal ceremony every night for that day’s winners. At the much busier and more crowded Summer Olympics, such a ceremony would be difficult to manage.

What is the stuffed animal?

According to the Olympic website, the mascot takes its name from “sooho,” which means protection, and “ho-rang-i,” which means tiger. The name is also a reference to “Jeong-seon A-ri-rang,” a folk song from the Gangwon Province where the games are taking place.

“The Soohorang is very cute and very pretty,” PyeongChang organizing committee spokesperson Sung Baik You told USA Today. “The athletes who have received the Soohorang have been very happy with it.”

What happened to the flowers?

Previous Olympic Games have seen athletes awarded bouquets of flowers, but at the 2016 Rio Olympics flowers were deemed unsustainable. The floral tradition does live on in Soohorang’s hat, which is adorned with paper flowers; according to the PyeongChang 2018 website, the symbol is a nod to “Uhsahwa,” paper flowers given to those who passed their national exams during Korea’s Joseon Dynasty (1392-1910).

You may not be able to compete for gold, but in one way you could be like Chloe Kim, Red Gerard and the other medalists: for $55, you can buy your own Soohorang on Amazon. 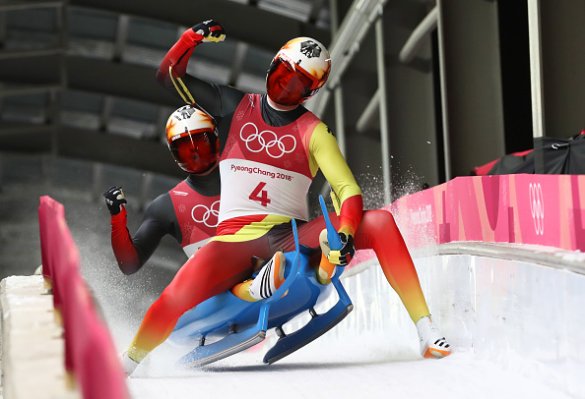 Doubles Luge Is the Olympic Sport That May Finally Break the Internet
Next Up: Editor's Pick