Cecile Richards: 'Reproductive Justice and Immigrant Justice Are Part of the Same Fight'

Victoria Ruiz — a Planned Parenthood patient, organizer and DACA recipient — recently took the stage at the National Press Club in Washington, D.C., just as President Donald Trump was addressing Congress down the street.

Victoria shared the story of how she arrived in the United States as a child. She also shared the hope that Trump and congressional leadership would act to protect her and the hundreds of thousands of others like her who have been living with uncertainty since Trump announced he would end DACA last year.

It has been 162 days since Trump chose to rescind the program that allowed Victoria and 800,000 undocumented immigrant youths to live, work and seek an education in the U.S. without risk of deportation. The continued failure of Congress to pass a clean DREAM Act has left many of them questioning their place in this country for a full five months now. That’s unconscionable — and we at Planned Parenthood won’t stand for it.

The very real fear of detention and deportation has far-reaching, devastating consequences — for individuals and for public health, as undocumented people forgo care and treatment. Fear stands in the way of undocumented people seeking out health care professionals for treatment of illnesses and basic reproductive care including birth control. The simplest necessary actions like going to the doctor, picking up a prescription or getting health insurance can become practically impossible. Today, immigrant communities have higher rates of unintended pregnancy and cervical cancer, and some have higher rates of HIV. Almost half of non-citizen women of reproductive age with low incomes lack health insurance.

At Planned Parenthood, we understand that reproductive justice and immigrant justice are part of the same fight. Because when women can share their medical histories openly and access reproductive health care without fear, they are better able to build healthy families, participate in the workforce and control their destinies. Many Dreamers and undocumented immigrants walk through the doors of Planned Parenthood every day because our centers are one of the few affordable places they can go, regardless of status, and feel comfortable seeking the care they need.

For Victoria, she was left to live on her own after her mother was detained and deported on her way back from visiting Victoria’s sick father in Mexico. When Victoria became sexually active, she had no one to turn to and she relied on her local Planned Parenthood for information and health care. Now she is a patient-turned-organizer, advocating for expanded access to health care for Latino immigrants. It’s because of DACA that Victoria was able to enroll in community college and become a fearless voice for change in her community.

But right now, Victoria is one of the many young people in this country whose future hangs in the balance. After DACA was rescinded, Victoria initially did not qualify for a renewal because her DACA expires shortly after the March deadline. And though she was able to submit a renewal after the California judge’s injunction in January, ordering the administration to continue the program, she is still waiting on the federal immigration office to know whether her renewal will be granted.

Congressional leadership can’t keep kicking the can down the road. Dreamers are our patients and supporters. They are also our friends, colleagues, neighbors and community leaders. The majority of Americans support protecting these young people.

Every day that passes is another in which the future and well-being of young people is at stake, and our elected officials must find a way to put their differences aside for their sake. Dreamers are a vital part of this country. They enrich and strengthen our country, and they deserve better than to be used as a political bargaining chip.

Continuing to attack our immigrant communities and families is immoral. No human is illegal, and no one should be forced out of the only country they’ve ever called home. We need a solution that treats all immigrants in the U.S. with the dignity they deserve.

This week, the Senate starts a rare open debate on immigration. It’s time for congressional leadership to stop letting these young people down. We demand a clean Dream Act, and we demand it now. 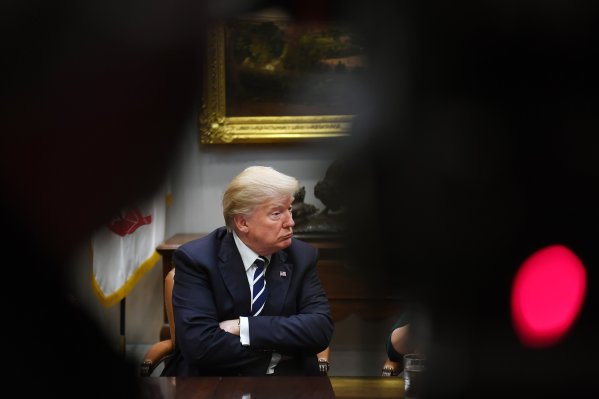 Congress Should Impeach President Trump if He Refuses to Speak to Mueller
Next Up: Editor's Pick