Game of Thrones Close-Up: A Chicken in Every Pot

Note: Eric Dodds is recapping Game of Thrones for Time.com this season; his first recap is up this morning. I previewed the first three episodes of the season last week.

This season, I’m doing something different–rather than try to review every aspect of these sprawling episodes, I’m going to zoom in on a specific scene or theme in each post. (I don’t promise to post every week, because there’s a lot of TV to cover on Sundays and only so much time–but don’t worry, there’ll be plenty to write about.) My first season four post follows. It contains spoilers, because obviously:

As season-opener episodes of Game of Thrones tend to do, “Two Swords” caught us up on a lot of stories (while not servicing quite every one). I don’t know the decision process that goes into choosing the running order, but I imagine it might be something like American Idol, in which the last performance–the “pimp slot,” in the parlance–goes to a performer who’s been on a hot streak.

The pimp slot in Game of Thrones‘ season-four premiere went to Arya and Sandor “The Hound” Clegane. I’m guessing this was not just because it involved a thrilling, brutal fight scene or because the duo are the Hope and Crosby of Game of Thrones but because the sequence reminded us of something we shouldn’t forget: It may not look like it in sunny King’s Landing, but Westeros is at war. Which means Westeros is hell.

It can be easy sometimes to forget that Game of Thrones is a story about a war. Not just a “power struggle” of political machinations, not a 3-D chess match, not a mythological, magical saga–though there are elements of each. There’s an actual war for control of Westeros, which we rarely see because it mostly happens offscreen, and we spend most of our time with the parties calling the shots, not with those firing them.

For kings and queens, war is about troop movements like the pieces on Stannis Baratheon’s map board. For armies, it’s brutal, intense engagements like the fiery battle of the Blackwater in season 2. But for the common folk, war is a long, lingering condition, like an endless winter, or a plague. It means devastation, mayhem, insecurity, the collapse of economies from lack of trade, lawlessness, and the robbery, murder, and rape of the defenseless. This is life for millions of ordinary people while a few of their superiors tussle over whether a stag, a wolf, or a dragon sits on the big pointy throne.

Arya and the Hound, having just left the scene of the Red Wedding, are wandering the Riverlands, the region of Westeros where the Lannisters and Starks have been clashing the most intensely. The episode cuts hard from Jaime and Brienne–themselves recently back from the front–by the golden shore of King’s Landing to the bleak, gray forest, and you can practically smell the haze of smoke from ruined villages. The Hound and Arya walk by the bodies of a small party left dead on the road, killed maybe for their allegiences, maybe for their money, maybe for the hell of it.

Our odd couple themselves are examples of the war’s costs. Arya, daughter of a losing family, is orphaned with no home to return to. The Hound, though he fought on the winning side, has paid the price himself: scarred, maligned, badly used by the king he was sworn to protect, embittered, traumatized–sick of the whole bloody thing. There’s a bit of funny but powerful banter between them as they talk about Arya’s lost sword, Needle, a name The Hound finds ridiculous. “Lots of people name their swords,” she says (her late father’s sword, Ice, is melted down at the opening of the episode). “Lots of cunts,” The Hound answers.

Sandor is using “cunt” in the British-slang sense–derisively, for a contemptible person–and he does so once more in the scene, as he demands a chicken from the Lannister thug holding court in the roadside inn. “You don’t seem to understand the situation,” the soldier warns. “I understand that if any more words come pouring out your cunt mouth,” The Hound says, “I’m going to have to eat every fucking chicken in this room.”

This is war the way The Hound sees it: only a naive person sees a sword–a workman’s tool for killing people–as a romantic object to be named. And only a contemptible idiot sees war as a good time. He’s become a loner, a disillusioned independent operator beholden to no side–which is maybe why, as many terrible things as he’s done, he’s become a favorite character. (I raised the comparison to The Wire’s Omar in my season preview, and in this episode The Hound says, “A man’s got to have a code,” an echo I have to guess was no accident.)

The scene in the inn is remarkable in its simplicity and silences. There’s been a lot of criticism of the way Game of Thrones has used sex–we barely had time to catch our breath before we were in a whorehouse this episode–but the soldiers’ molestation of the innkeeper’s daughter is to a point: this is happening, you can be sure, all across the landscape, perpetrated by criminals flying the lion banner, in places without an Arya and Hound to step in. It may well happen here days after they leave.

And while the fight scene itself is brutal and bracing, what lingers with me is the quiet, menacing encounter across the table that comes before: the fire quietly crackling as The Hound drinks, looms, and lets the “talker” waste his breath, prattling about torture and offering to trade a chicken for the chance to rape Arya. It’s satisfying, so soon in narrative time after the Red Wedding, to hear the guy put in his place–maybe more satisfying than the actual fight and killing.

There’s something workmanlike in the way The Hound dispatches the room of men; it’s a thing he has to do. (Physical labor, like carpentry, as the soon-to-be-dead man puts it.) As for Arya, she savors her revenge, reminding her target of Lommy’s death and her own identity before she dispatches him, but it’s an ugly, inglorious, gurgling end he comes to. Arya gets a horse out of it in the end, but does she really get satisfaction? Unlike The Hound, Arya still sees a point in naming her sword and keeping a list of names for vengeance. She is not a complete nihilist yet. But she’s learning.

So they leave the scene, each with a prize that reflects their own worldview and expectations of this life. Arya got some kind of justice. The Hound got a chicken. The last we see them, they’re riding off toward a landscape scarred with smoldering settlements, in each of which–and multiplied surely by dozens more across the countryside–no one that day has gotten a happy ending. 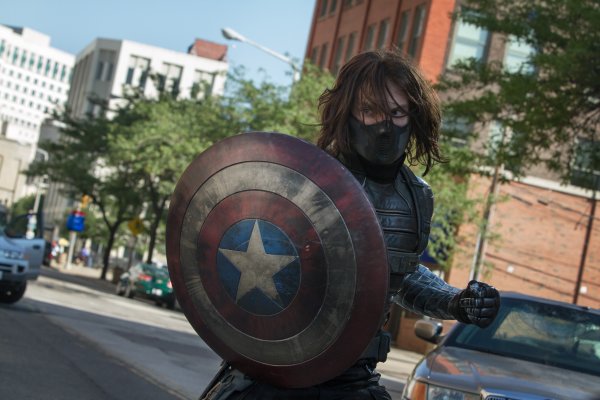 7 Things You May Have Missed in Captain America: The Winter Soldier
Next Up: Editor's Pick