Adam Rippon and Reese Witherspoon Is Officially the Friendship We Deserve

Adam Rippon may have captured the hearts of 2018 Winter Olympics viewers everywhere when he made his sparkling Olympic debut on the ice rink at Pyeongchang, South Korea, but he’s crediting his success to an unlikely source: Reese Witherspoon.

The Team USA skater (who made headlines earlier for his spirited critiques of vice president Mike Pence) struck up a friendly repartee with Witherspoon ahead of the 2018 Winter Olympic Games after she posted a glowing endorsement of him on her Twitter account, which he responded to with an equally enthusiastic tweet that also suggested a potential movie plot for the two of them to star in that paralleled real-life pretty closely.

This blossoming friendship has only flourished since Rippon has started competition at the Winter games. Following his much-lauded free skate for the team event, Rippon told NBC that he not only wanted to skate well for his country, but also for Witherspoon.

“There are so many emotions when I step on the ice,” he said. “I want to represent my country to the best of my abilities. I want to make Reese Witherspoon proud.”

Witherspoon, as might be expected, let Rippon know that she was, indeed, proud of him.

On Tuesday, Rippon kept the love fest going in another interview with NBC, where he credited Witherspoon with helping him to win his medal.

It’s official: Adam Rippon and Reese Witherspoon is not just the friendship that we need, but that we deserve. 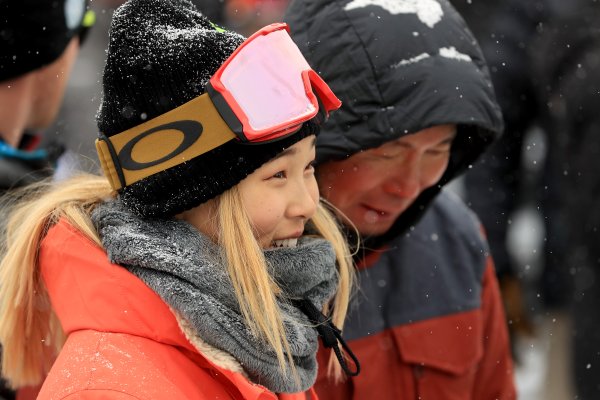 Chloe Kim's Dad Has Olympics Texting Down to an Art
Next Up: Editor's Pick