How Old Do You Have to Be to Compete in the Olympics?

A 17-year-old just took home an Olympic gold medal for snowboarding. Her name is Chloe Kim, and the American snowboarder landed a near-perfect score of 98.25 at the 2018 Winter Olympic Games in PyeongChang. Getting to the Olympics—let alone scoring gold—is no easy feat, especially at such a young age. Kim now has many wondering: how old do you have to be to compete in the Olympics?

Kim actually qualified to compete in the 2014 Winter Olympics, but she was still two years shy of the snowboarding’s minimum age limit of 15-years-old. “Looking back on it, I’m really glad I couldn’t go,” Kim tells TIME. “I don’t know how my 13-year-old self would have dealt with it.”

But that age requirement is not a universal for all sports. There are in fact many teenagers competing in the 2018 Olympics this year, and many others who have done so in the past. Here’s the lowdown.

How old do you have to be to compete in the Olympics?

According to International Olympic Committee rules, there is no specific age limit to compete in the Olympic Games. The age limit depends on the rules set forth by each International Sports Federation. In Kim’s case, for snowboarding, it’s 15, but it varies according to sport.

Who are the youngest athletes in the 2018 Olympics?

Nope, it’s not Kim. The youngest athlete currently registered for the 2018 PyeongChang Olympics is Wu Meng, a 15 year-old Chinese halfpipe skier. But she’s not the only 15 year-old competing in the Olympics this year. In fact there are five other 15-year-old Olympians this year, according to NBC Sports, and four 16-year-olds. The youngest member of Team USA this year is 17-year-old men’s figure skater Vincent Zhou.

Who are the youngest athletes in Olympic history?

According to Olympic figures, Greek gymnast Dimitrios Loundras is the youngest known medalist. When Loundras finished third in the team parallels bars at the 1896 Olympic Games, he was 10 years and 218 days old.

Over thirty years later, Luigina Giavotti of Italy won the silver medal in the team gymnastics event in 1928. She was 11 years and 302 days old.

The youngest known male gold medalist is Japanese Kuoso Kitamura, who won the 1500m freestyle at the 1932 Games, aged 14 years and 309 days. For women, it’s American Marjorie Gestring, who scored a gold for the 3m springboard at the 1936 Games, aged just 13 years and 268 days. 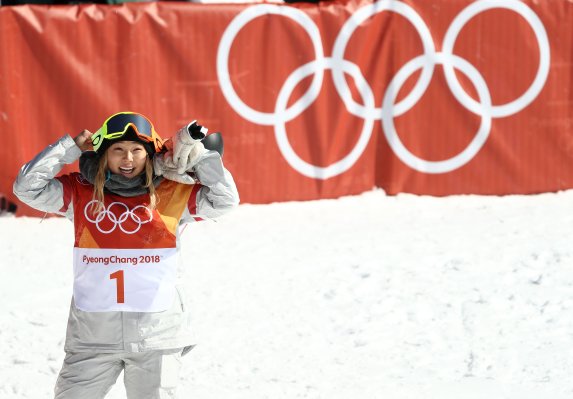 Chloe Kim Took a Dance Break Before Soaring to Gold Like Only She Could
Next Up: Editor's Pick