The World's Largest Democracy Is Heading to the Polling Booth

An Indian election officer applies an indelible ink mark on the finger of a woman during the first phase of elections in Dibrugarh, in the northeastern Indian state of Assam on April 7, 2014
Altaf Qadri—AP
By Krista Mahr

National elections kicked off in India, the world’s largest democracy, on Monday, with voters in the northeastern states of Assam and Tripura heading to the polls. The closely watched vote, in which the incumbent Congress Party is going head to head with the opposition Bharatiya Janata Party (BJP) for control over India’s lower house of Parliament, takes place over the next five weeks in nine phases across the nation.

Over 814 million people are eligible to vote, with results due mid-May. In the media, the race has shaped up to be a showdown between Congress vice president Rahul Gandhi and BJP prime-ministerial candidate Narendra Modi. Gandhi, part of India’s most powerful political dynasty, has promised voters that Congress will continue to focus on inclusive growth and expand the host of welfare programs it has instated since coming to power in 2004. Modi, the self-made chief minister of Gujarat with close ties to India’s Hindu-nationalist movement, says he will put India back on the fast-growth path and rid New Delhi of the corruption that has dogged the last two Congress-led coalitions.

But several other smaller parties are likely to play a crucial role in how India’s next government is formed. If neither Congress nor the BJP wins a clear majority of seats in Lok Sabha, India’s lower house, others will be pivotal in helping form the next coalition — and naming the next PM. If both Congress and the BJP perform very poorly, a “third front” coalition made up of the smaller parties could also come to power.

Perhaps the biggest challenger among them is the Aam Aadmi Party (AAP), the upstart party led by former civil servant Arvind Kejriwal, which brought its anticorruption fight to the national stage after an impressive political debut in New Delhi local elections in December. Kejriwal is running against Modi for the parliamentary seat in Varanasi, the ancient city holy to Hindus in the northern Indian state of Uttar Pradesh.

As of today, a variety of outcomes are still on the table, though polls in the run-up to the vote favored a strong BJP showing. Multiple surveys indicate that after a decade, voters are weary of a Congress-led government and think a change of regime would prove more effective in solving major problems seen as holding India back, like poverty and corruption.

Because of that anti-incumbency mood — and the energetic and expensive campaigns run by the parties — voter turnout is expected to be high. In the last national vote in 2009, turnout was above 58%.

In 2009 in Assam, where the first phase of voting started Monday, turnout was nearly 70%. Despite the state’s high poverty rates and physical isolation from the rest of India, voters there once again seem determined not to squander their opportunity to participate in the world’s largest democratic exercise. Fifty-one candidates from Congress, BJP and several other parties are vying for the state’s five seats in Lok Sabha. (Tripura, a small state in the northeast, also goes to the polls today.) The BJP is looking to make gains in the region, which is a Congress stronghold.

“Of course I’ll vote,” said Parbati, a plantation worker on a tea estate in Assam. “I know the politicians don’t keep their promise. But it is my right to vote, and I must do it as an Indian citizen.” Others echoed her sense of duty. In a refugee camp outside the city of Tezpur, a young resident and first-time voter acknowledged that “nothing will change” in a new government. But, he adds, “I must vote. It is my right.”

— With reporting by Arijit Sen 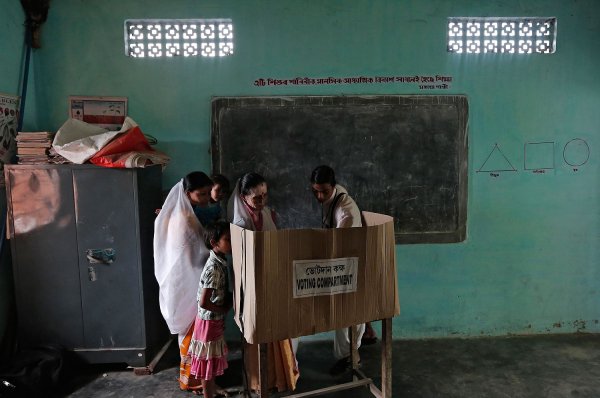 The World’s Largest Election Begins
Next Up: Editor's Pick