Activists prepare a barricade inside a government building in Donetsk, Ukraine, on April 7, 2014
Alexander Ermochenko—AP
By Alex Fitzpatrick and Maddy Fry

Hundreds of pro-Russia demonstrators who took over government buildings in Donetsk on Monday and who have called on Russian President Vladimir Putin to send troops to their aid are declaring the eastern region a “people’s republic” that is independent of the Ukrainian capital, Kiev.

The announcement, posted in a video on YouTube, was also delivered outside a building being occupied by protesters, the Guardian reports. “Seeking to create a popular, legitimate, sovereign state, I proclaim the creation for the sovereign state of the People’s Republic of Donetsk,” a spokesperson for the protesters told the crowd.

Police are negotiating with the protesters, who demand a secession referendum similar to the one carried out in Crimea before that peninsula was annexed by the Kremlin.

The unrest in Donetsk is adding to tensions stirred by Sunday’s shooting death of a Ukrainian naval officer at the hands of a Russian soldier. Russian media reported that Ukrainian soldiers on their way home from a night out got into a dispute with Russian soldiers who were guarding a military base. Dmytro Tymchuk, an analyst at Kiev’s Center for Military and Political Studies, later claimed in a Facebook post that Russian servicemen shot a Ukrainian naval officer twice in the head during a heated argument, the Guardian reported.

Tensions between Kiev and Moscow have been high since March around the annexation of Crimea, which is predominantly populated by ethnic Russians. The news of the Ukrainian officer’s death came just after interim Ukrainian Prime Minister Arseniy Yatsenyuk lashed out at Russia for allegedly stoking unrest in Ukraine’s eastern provinces.

“[Russia’s] plan is to cross the border and seize the country’s territory, and we will not allow it,” Yatsenyuk said. 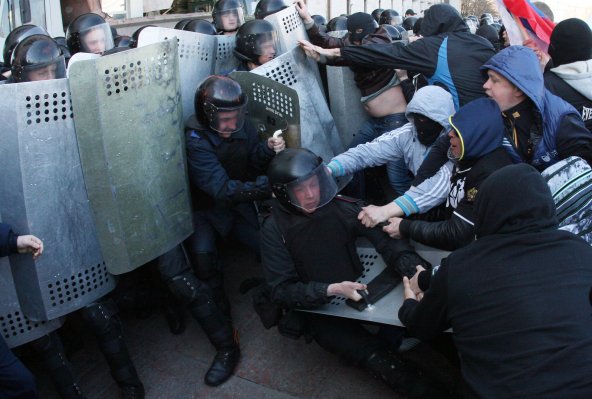 Clash in Ukraine
Next Up: Editor's Pick