By Tessa Berenson and Philip Elliott

But it also raised broader concerns about the standards of personal conduct that the president demands in his staff.

Veterans from previous administrations say hiring choices during their times often went far beyond questions of legality or competency and typically considered political, ethical and cultural issues. This may no longer be true, they say.

In Porter’s case, the claims from two ex-wives that he abused them physically and emotionally were enough to prevent him from being given a permanent security clearance during the year he worked in the White House. But some former White House staffers say a potential hire like that may not have made it through the gates in the past.

“If it was a significant enough issue, it’s not even a matter of whether a person holds a security clearance,” says Laura Terrell, an attorney who worked in the White House Clearance Counsel during the George W. Bush Administration. “It’s a question of whether they would be working in the White House in the first place.”

Trump ran for president pledging to “hire the best people” and “drain the swamp” of unethical behavior in Washington. But he’s also set an unusually low bar for a White House job compared to his predecessors.

Take the high-profile position of White House communications director, which has had a high turnover rate during the Trump Administration. Trump’s first pick, Jason Miller, stepped aside before he even started after claims that he had an affair with another transition official surfaced. Mike Dubke left just before ethics requirements would have kicked in that he sell his business stakes. Anthony Scaramucci was fired after just 10 days for a profanity-laced interview, but he faced similar concerns about his investments. The job is now held by former campaign aide Hope Hicks, who faces questions about her role in crafting responses to a meeting in Trump Tower and the Porter scandal.

Then there’s former speechwriter David Sorenson, who resigned abruptly on Friday after a domestic violence allegation (which he denies). And former deputy White House aide Sebastian Gorka, who faced an arrest warrant in Hungary for weapons charges and questions about his ties to a controversial Hungarian nationalist group during his time in the White House. And former National Security Advisor Mike Flynn, who failed to report a financial relationship with a Russian-backed state TV outlet and lobbying on behalf of the Turkish government. And Trump’s son-in-law, Jared Kushner, who failed to disclose dozens of financial holdings when he went to work for the Administration.

Some of Trump’s campaign hires have run afoul of the law: Flynn and former campaign advisor George Papadopoulos, who both pleaded guilty to lying to FBI agents; and former campaign manager Paul Manafort and his deputy, Rick Gates, who were indicted on charges related to payments for foreign lobbying.

Meantime, CNN reports that Porter was not alone in working without a full security clearance, with the full list including Kushner and as many as 40 White House officials and political appointees.

In previous administrations, this level of corner-cutting would be considered extraordinary. Now it’s a window into how Trump and those around him refuse to be boxed-in by the usual rules. After all, this is a president who has refused to place his wealth into a blind trust, still has a lease with the federal government to operate a hotel just a few blocks from the White House and steadfastly refuses to release his tax returns.

Even in Porter’s case, it wasn’t clear that he would resign immediately. In fact, some in the West Wing encouraged Porter to stay on the job and fight the allegations rather than resign. That approach did not prevail, in part because there were pictures — and the President responds most strongly to visuals.

Privately, the President fumed about the Porter situation, but publicly he stuck by his side, telling reporters that Porter had maintained his innocence — “He says he’s innocent, and I think you have to remember that.” — and arguing on Twitter that false accusations were ruining men’s lives. (It’s worth noting that the President stands accused of sexual misconduct by at least 18 women. The White House maintains they are all lying.)

In the White House, decisions on hiring and firing in situations like this go straight to the top.

As the White House is made aware of the potential problems, it’s up to senior members of the Administration — usually the White House counsel (currently Don McGahn), chief of staff (currently John Kelly) and sometimes the president himself — to decide what to do.

“There are two processes,” Timothy Flanigan, former White House deputy counsel under President George W. Bush, explains. “One is the security clearance process, and the other is the fitness, or, for lack of a better term, the ’embarrassment to the president’ factor.”

In other words, as aides weigh background check issues, separate from the question of whether or not the person in question should get a security clearance, they’re also considering whether the conduct would distract from the mission of the president and the White House. They have to “make the call [if] this is too risky, too unacceptable,” Flanigan says, “[or if the] opportunity for embarrassment, distraction, et cetera is too great.”

Ultimately that doesn’t seem to bother Trump as much as it did his predecessors, however.

“My impression is [Trump] wants somebody of a certain personality, a certain approach to working in his White House,” says Terrell. “He may be less concerned about the formalities of background investigations [or] what the tolerance by other presidents has been for risk, but he doesn’t see that as something that factors into how he looks at people.”

“There is a different level of tolerance of risk by the Trump White House in terms of the people that the president wishes to employ and have as his senior people,” she adds. “That’s the bottom line.”

With reporting by Alana Abramson

Write to Tessa Berenson at tessa.berenson@time.com and Philip Elliott at philip.elliott@time.com. 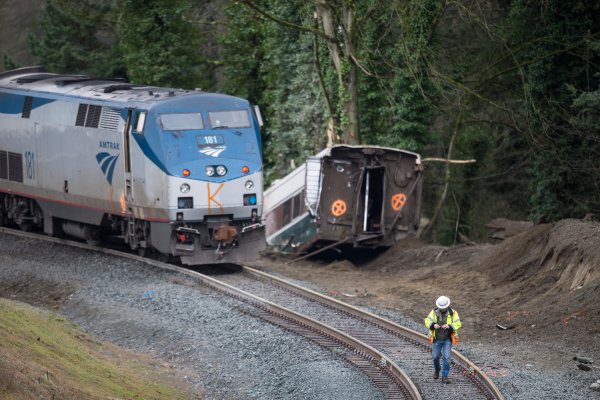 President Trump's Budget Cuts Amtrak Funding in Half Despite a String of Deadly Crashes
Next Up: Editor's Pick