Live From Mars: Interactive 360 Panorama from the Curiosity Rover

A note to viewers: LightBox suggests viewing the panorama in full-screen mode. For visitors on a mobile device or tablet, we recommend utilizing our versions optimized for a fully immersive experience:

Taking pictures on another world has never been just point and click. For decades, unmanned probes from Earth have been venturing to distant planets, moons and other bodies—and for just as many decades, the images they have sent home have been composed and transmitted in a decidedly painstaking way. That is especially so in the case of the 360-degree panorama NASA is now releasing of the Curiosity rover’s landing site in Mars’s Gale Crater.

Even on Earth, you have to be selective when you photograph a landscape. After all, no matter how glorious your picture of one part of the Grand Canyon is, it by definition leaves out countless other, equally glorious parts. The only way to capture the whole sweep of the place is to take many small images and bit by bit, piece them all together. That’s hard enough when the camera is in your hand. Now imagine doing it when all of your hardware is 154 million miles away and the data has to be streamed back you in a comparative trickle that, even moving at light speed, takes 17 minutes to get here.

(See more: Inside Look at the Mars Curiosity Rover)

But NASA did just that to produce its full pirouette picture of the Marscape that surrounds Curiosity. The panorama was built from 30 smaller images shot by the rover’s Navcams—or navigation cameras—on Aug. 18 and Aug. 7. Each picture has a resolution of 1,024 pixels by 1,024 pixels, and all of them have been combined in such a way that the seams connecting them disappear. The lighter colored strip at the top right of the image is the rim of Gale Crater—chosen as the landing site because it was once a deep sea. Also visible is the peak of nearby Mount Sharp, which rises 3.4 mi. (5.5 km) into the rust-red sky. The portions of the picture in the Martian sky that appear gray are parts of the mosaic that have not yet been added, but will be the next time NASA updates the image.

As their name implies, the Navcams are used mostly for reconnaissance purposes—scouting out where the rover will drive and mapping the best route to get there. They were thus not designed with beauty in mind—and that means they shoot only in black and white. The cameras mounted atop Curiosity’s mast capture the full range of desert-like colors that define the brutally beautiful Gale Crater environment. The entire suite of on-board cameras will have a lot of work to do in the two years ahead—and every picture they take will be one worth saving. Once the rover starts rolling, after all, it will never be staying in any one place for long. 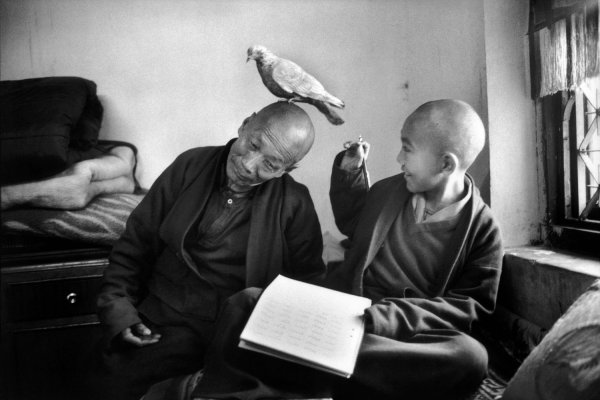