If you didn’t know artist Kehinde Wiley before, you will now: He’s the painter behind former President Barack Obama’s stunning official portrait, which was unveiled on Monday at the Smithsonian National Portrait Gallery.

“It’s a huge responsibility,” Wiley told The Guardian in 2017. And though it may have been a humbling duty to paint former President Obama, the painting fits within Wiley’s cannon: bold and often colorful depictions of men (and recently) women of color in the style of Classical European portraiture—a style that has made him both celebrated and successful.

Who is Kehinde Wiley?

Wiley was born South Central, Los Angeles in 1977, where he was raised by a single mother and was one of six siblings. His mother was a linguist, and he grew up surrounded by books. Wiley took his first art lesson at age 11, and at age 12, in 1989, Wiley was one of 50 American children who went to live in Russia at the Center for U.S./U.S.S.R. Initiatives. There, he studied art and Russian language. He eventually attended the San Francisco Art Institute, and studied art in graduate school at Yale.

He is based in New York, but has studios around the world in Beijing and West Africa, where his father is from.

Kehinde Wiley’s mainstay is “street casting.” He began painting young men and women from the streets of Harlem and painting them in their street clothing in the styles of old-world paintings; Wiley continues that practice around the world in places like the Congo, Morocco, Haiti and India.

Wiley has, however, painted famous faces prior to working with Obama. In 2009, Michael Jackson commissioned a portrait, which wasn’t painted until after the king of pop passed. He has also painted rappers LL Cool J and Ice-T, along with soccer royalty around the world.

And while he has not done a portrait of Beyoncé, some have mused that his work was an influence on her pregnancy photoshoot.

Where can you see Kehinde Wiley’s work?

Beyond the National Portrait Gallery, you can view Wiley’s art on display at museums around the country. He has paintings in the North Carolina Museum of Art, the Brooklyn Museum, the Milwaukee Art Museum, and the Detroit Institute of Arts. You can also scroll through his work on his Instagram. 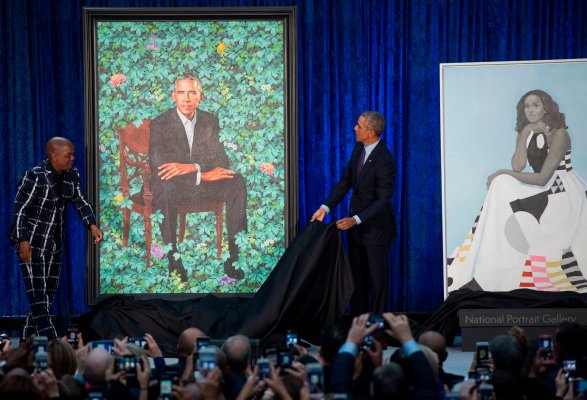 Barack and Michelle Obama Have New Portraits
Next Up: Editor's Pick