While you’re busy watching the ice skaters, hockey players, snowboarders and other athletes go for gold at the 2018 Winter Olympics, there’s another competition happening behind the scenes: Photographers jostling for the top shots that’ll appear on newspaper front pages and website homepages across the world.

Getty Images photographer Dean Mouhtaropoulos made one such captivating image on Monday — capturing Team USA figure skater Adam Rippon in a whirlwind blur of a spin during the Men’s Single Free Skating event.

Mouhtaropoulos’ image of Rippon deservingly made the rounds on social media, with commentators crediting the photographer with capturing the grace of Rippon’s routine.

But how did Mouhtaropoulos make the image of Adam Rippon?

Something around 1/60th of a second would have been long enough to capture Rippon’s spin as an almost magical-looking blur. But because Rippon is spinning on a stationary spot on the ice, it’s also still short enough to make an image that still looks like a figure skater rather than an altogether unidentifiable mess. The big challenge for Mouhtaropoulos would have been keeping his camera steady while shooting at a longer than usual shutter speed. He may have been using a tripod or, more likely for sports photographers, a monopod to get the job done.

For comparison’s sake, here’s an image of Adam Rippon during a similar performance, taken at a more commonly used shutter speed:

The long-exposure technique is similar to the one that photographer Cameron Spencer used to take this now-famous photo of Jamaican runner Usain Bolt during the 2016 Olympics in Brazil. But in Spencer’s case, because Bolt was running from right to left, he would have had to “pan” his camera to match Bolt’s position, keeping Bolt sharp but giving a wonderful sense of motion in the background and in Bolt’s record-setting legs.

Usain Bolt of Jamaica competes in the Men's 100 meter semifinal on Day 9 of the Rio 2016 Olympic Games at the Olympic Stadium on Aug. 14, 2016 in Rio de Janeiro, Brazil.
Cameron Spencer—Getty Images

Many Olympic photographers have taken to using a similar technique during the ski jumping events, too: 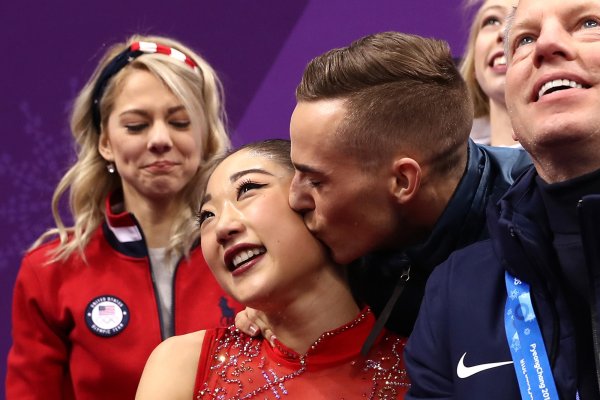 The Internet Is Going Wild for Adam Rippon and Mirai Nagasu's Beautiful Friendship at the Olympics
Next Up: Editor's Pick