Sunday night’s figure skating team event at the 2018 Winter Olympics in Pyeongchang, South Korea netted Team USA the bronze medal during a program where Mirai Nagasu and Adam Rippon shone brightly for the U.S. team. Nagasu made history as the first American woman to land a triple axel in Olympic competition, while Rippon earned a bronze medal for his free skate performance that immediately won the hearts of the Internet and the world.

Viewers were quick to notice that it wasn’t only Rippon and Nagasu’s feats on the ice that were worth watching, however; both were enthusiastic about encouraging each other while performing, with Rippon’s especially emotive reactions to Nagasu’s historic triple axel quickly becoming a hit online. The figure skating pair have a friendship that extends beyond just the 2018 Winter games, however; the pair have been friends for more than ten years and have helped each other as they’ve faced both challenges and successes.

In an interview with NBC after his free skate, Rippon had an especially sweet anecdote to share about the duo’s journey to the Olympic triumphs they’ve experiencing in Pyeongchang.

“You know, especially tonight, my friend Mirai [Nagasu] and I…four years ago, we got In-N-Out, we went back to her house, we climbed up to the roof of her house, and we were eating In-N-Out because we were so upset that we weren’t at the Olympic Games,” Rippon said. “Tonight, you know, the Olympics are truly magical, because we came out here tonight, and — we’re roommates here, staying at the Olympic Village — we gave each other a hug, and I said, ‘You know, Mirai, we’re here! We did it!'”

As might be expected, the Internet had all of the feelings about Rippon and Nagasu’s beautiful friendship and took to the web to share their feelings about the matter. 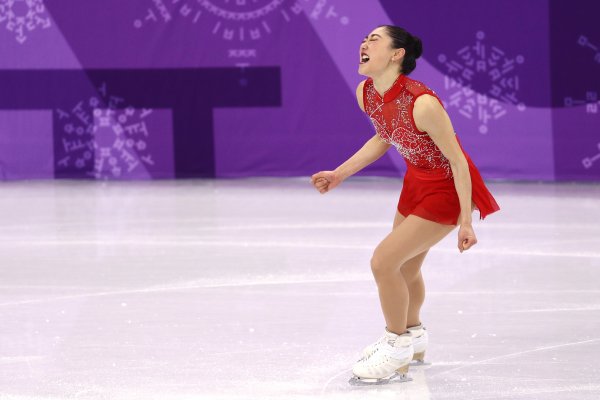 Why Mirai Nagasu's Historic Triple Axel at the Olympics Is Such a Big Deal
Next Up: Editor's Pick