U.S. figure skater Mirai Nagasu made history at the 2018 Winter Olympics on Sunday night when she became the first American woman to land the challenging triple axel jump in Olympic competition. And her Olympic journey isn’t over — she will compete next in the women’s individual figure skating competition on Feb. 21.

The triple axel jump, composed of three-and-a-half tight rotations, is a rarity for women in professional figure skating, with only a handful of them completing it in international competition. Japanese figure skater Midori Ito was the first to do so back at the 1988 NKH Trophy in Tokyo, then again at the 1989 World Championships, where she won the title. In 1991, Tonya Harding was the first American woman to land the triple axel in international competition.

Ito and Japanese figure skater Mao Asada were the only two women to land the triple axel jump in Olympic competition before Mirai Nagasu, who helped the U.S. win a bronze medal in the team competition at the 2018 Winter Olympics in PyeongChang, South Korea.

“I’m fortunate I’m an American so I am the first U.S. lady to land a triple axel here,” Nagasu said after her performance Sunday, where she earned the full 8.5 points for the triple axel. “To nail it today is really exciting; today is a day of accomplishment for me.”

Axel jumps are a regular part of figure skating, and triple axels are common for men. At the same event, Nagasu’s teammate Adam Rippon landed two triple axels in his routine, which earned him third among the men in the free-skate program. (No skater has ever landed a quadruple axel in competition.)

Part of what makes a triple axel jump so difficult is its forward take-off and tight, fast spins. “I think because we have so many backward takeoff jumps, the axel is a little bit harder,” Nagasu said in a video for The Players’ Tribune, which followed her training to complete the triple axel. “They feel really good; they feel like they were meant to happen. But falling on the triple axel is really brutal.”

The triple axel jump is more challenging for skaters than other signature moves, like the triple lutz or triple toe loop jump, which both involve a backward takeoff. Nagasu has easily fit these jumps into her program before.

Nagasu began training for the triple axel after just missing the U.S. Olympic team for the 2014 Winter Games in Sochi, where she could have fought for an improvement on her fourth place finish at the 2010 Winter Olympics in Vancouver. “I would have dreams I could do this jump,” Nagasu told TIME’s Alice Park. “But I would try it on the ice and I would fall a lot.”

Reaching the physical strength to complete such a jump — and do so dozens of times in practice — required a lot of work. Nagasu changed her training routine and her diet to accomplish this goal, and now her coach Tom Zakrajsek says “she is what I would call ripped.”

“You can’t let your body go in any way and do this jump a lot,” Zakrajsek told TIME.

Indeed, accomplishing the triple axel is so rare that the film crew for the 2017 film I, Tonya found difficulty in portraying Harding’s historic triple axel jump‚ a point of pride for the disgraced figure skater that is central to the film. “There has been only six women since Tonya who have done a triple axel,” producer Tom Ackerley told the Hollywood Reporter back in December 2017. “Even if there was one who was doing it today, she’d be training for the Olympics and couldn’t risk doing it for the film.” The film instead used special effects and other figure skaters to help capture the shot — which, in the film, is shown in slow motion with a focused view on Robbie’s face.

As for Mirai Nagasu, her historic triple axel jump warranted an outburst of messages from veteran figure skaters, including Olympic medalists Kristi Yamaguchi and Scott Hamilton. 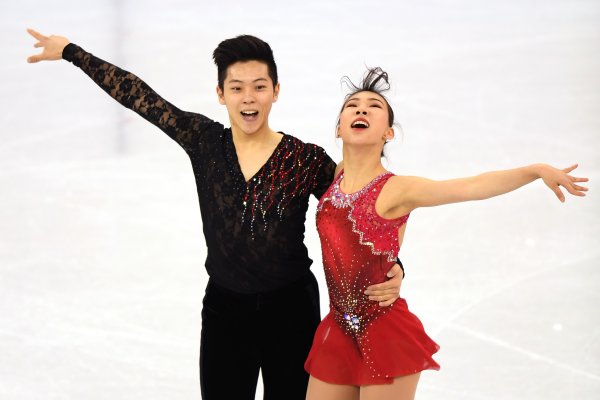 Meet the Olympic Figure Skater Who Was Born to Be Internet Gold
Next Up: Editor's Pick