Adam Rippon's Grace Under Pressure Is Exactly What the Olympics Needed

On Sunday night Adam Rippon became the first openly gay American figure skater to compete at the Olympics. And his routine, part of the bronze-medal winning U.S. team event at the PyeongChang 2018 Winter Olympic Games in South Korea, felt like the sort of moment 2018 urgently needed. It can be easy to miss milestones in representation, or to get jaded about their relative importance. How much does the first mean if it lags behind other meaningful markers of progress—or if it comes so far ahead of social change that it seems like a broadcast from another dimension? But Rippon’s milestone status feels different.

Rippon made headlines going into the Games for a war of words with Vice President Mike Pence, who was leading the delegation to the Games. The skater again called out Pence’s poor record on LGBTQ issues, doubling down on claims that Pence supports the debunked concept of “conversion therapy” for gays. (Pence denies this claim.) Pence’s office requested a meeting with the skater before the Games began, an unorthodox invitation that Rippon rebuffed.

But the athlete ended up defusing the drama himself. Indeed, Rippon may well have won over many Pence supporters in his response to NBC commentator Mike Tirico’s question after his routine Sunday. “My mom has always taught me to stand up for what I believe in, and that has given my skating a greater purpose,” Rippon said. “So I go out there and I’m not only representing myself, I’m representing my coaches, I’m representing my country and I’m representing my teammates. So I remember that and that’s how I stay focused.”

It was a classy response that also cannily reminded the audience of exactly what Rippon is doing in PyeongChang: representing the U.S. as much as Pence is. And what a representation! The U.S.’s standard-bearer moved his arms with delicacy and grace, calling to mind a flower reaching toward the sun while his competitors might have preferred to evoke a blunt sense of force. The frame of the TV seemed barely able to contain him. He swirled around the edges of the rink and, like a pop singer in command of his audience, skated right up to the judges’ panel. This was a routine—capped off by Rippon’s resplendent rhinestoned top—that was willing to dare, one whose willingness to indulge oddity in the pursuit of beauty made for a uniquely gay experience.

The Olympics had begun on a somewhat sour note, with the U.S. seeming marginal and small during the opening ceremony as Pence sat through the entrance of the unified Korean team. History was happening, and the U.S. was rather petulantly sitting it out. But one politician’s actions don’t tell the whole story. Rippon made his case eloquently before the Games began. Taking to the ice, he restated it, merging excellence with a bold unwillingness to be anyone but himself.

During the Opening Ceremony, Rippon posed with openly gay freeskier Gus Kenworthy for a photo that’s surprising at how inoffensive it is—the pair just look confident and happy. But Rippon is, in some ways a living provocation to very old-school ideas of what an Olympian is or can be. His teeth had been whitened nearly blue; his hair was styled in the one haircut every gay man in his 20s seems to have; he jokingly described himself as “the full-grown monster I’m supposed to be” in his preroll and looked directly into the camera to deliver quips in his post-skate interview. He’d been waiting a long time, as he’d missed previous shots at the Games, and seemed to revel in every moment. This, too, is a way to be American, with flair, perseverance, excess and a pleasure in the inherent melodrama of being oneself. It’s one that—likely seen by young people across America and around the world—could have more lasting ramifications than a moment of diplomacy-by-sitting.

Rippon was part of an exciting night for U.S. skating, one that also included Mirai Nagasu’s triple axel, a first for an American woman at the Olympics. But his success has special resonance, coming at a moment when politics at home and abroad seem to be tilting in the direction of a backlash against gay rights. Rippon’s audaciousness suggests that being oneself, even under the greatest of pressure, is the only way forward. His years of waiting for the Games, and recent tense weeks, resolved themselves perfectly—he made the most of his milestone, one that came right on time. 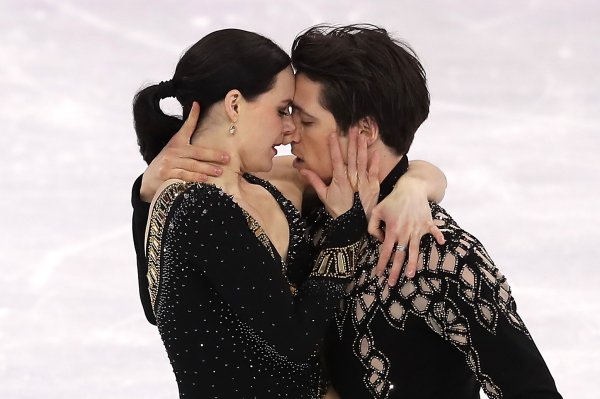 The Internet Is Falling in Love With These Ice Dancers Who Just Won Gold
Next Up: Editor's Pick