Should an Army Accused of Ethnic Cleansing Be Allowed to Join U.S. Military Exercises?

The U.S. regularly conducts military rehearsals with the armed forces of other countries around the world, annual exercises and emergency rescue drills that are often subject to political headwinds. But when this year’s Cobra Gold exercises kicked off Tuesday in eastern Thailand, there was a particularly controversial attendee: Myanmar’s military, known locally as the Tatmadaw, stands accused of ethnic cleansing, and some say genocide. Why then, human rights and security experts have asked, were they invited to stand beside some of the region’s most elite defense forces?

The annual Cobra Gold drills, America’s largest war games exercise in the Asia-Pacific region, are largely meant to strengthen regional security and disaster response readiness. The operations are also a premier expression of American technical expertise and leadership, with the U.S. directing a legion of other nations’ armed forces in field exercises and humanitarian projects in local Thai communities. This year’s iteration of Cobra Gold, the 37th, is expected to include 6,800 U.S. military personnel, nearly double last year’s number according to Reuters, as well as delegations from 29 countries including Singapore, Japan and Indonesia.

Thailand invited up to three officers from Myanmar as observers to the disaster and humanitarian portions of Cobra Gold, according to Reuters. Myanmar’s delegation will be dwarfed by those of other countries. South Korea, for instance, will be represented by more than 400 soldiers. But the inclusion of Myanmar’s military, however limited, has nonetheless attracted criticism and raised questions about the Trump administration’s commitment to human rights.

This isn’t Myanmar’s first invitation to Cobra Gold; the country was invited in 2012, amid its much-lauded transition from military rule to a semi-democratic government now led by Nobel laureate Aung San Suu Kyi. At the time, observers similarly voiced apprehension because of the country’s ongoing civil war against ethnic minority and other non-state armed groups. This year, however, the context is even more complicated. Recent military violence in Myanmar’s western state of Rakhine has displaced nearly 690,000 Rohingya, a mostly stateless Muslim minority, into refugee camps in neighboring Bangladesh. The army’s so-called “clearance operations,” which the military claims are part of a legitimate counter-insurgency campaign, have been labeled a “textbook example of ethnic cleansing” by the U.N.’s top human rights official, Zeid Ra’ad al-Hussein, who also said he couldn’t rule out “elements of genocide.”

U.S. Ambassador to Thailand Glyn T. Davies downplayed Myanmar’s presence at Cobra Gold, saying that the country “is not a participant nation” and “not part of the exercises here,” according to the AP. Nonetheless, welcoming them to the high-profile defense gathering, some human rights experts say, amounts to giving the Myanmar military a free pass. According to Phil Robertson, Deputy Asia director for Human Rights Watch, the invitation alone could be understood by Myanmar’s generals as an implicit message that committing atrocities will not disqualify them from “the club of regional militaries.” Moreover, Robertson tells TIME, “the lack of American political will to stand up for human rights shows that President Trump has done so much damage to that heretofore critical piece of U.S. foreign policy.”

U.S. lawmakers have also expressed concern about Myanmar’s presence. Sen. John McCain told the AP that “militaries engaged in ethnic cleansing should not be honing their skills alongside U.S. troops.” McCain had previously encouraged closer military ties with Myanmar, but in September he withdrew funding for training and workshops with Myanmar from the 2018 defense budget amid the Rohingya crisis.

Myanmar’s inclusion at Cobra Gold, however peripheral, is a win for the country’s generals as they seek to reinforce their legitimacy following decades of devastating military dictatorship and pariah status. “As large-scale war-games earlier this month indicated,” says Bangkok-based security analyst Anthony Davis, referring to recent drills in Myanmar on a scale unseen in decades, “the Tatmadaw is clearly engaged in efforts both to improve its capabilities and burnish its credentials at home and abroad as a professional military.” 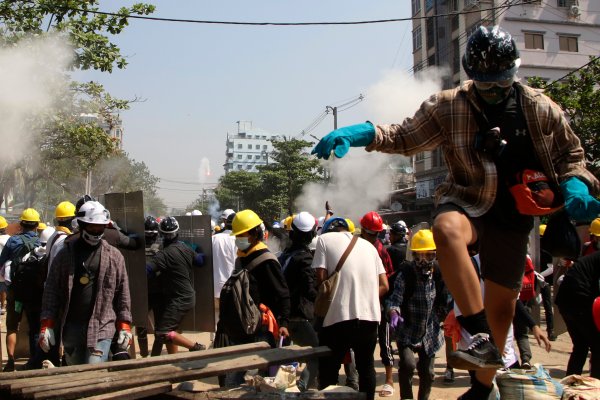