The U.S. is ready to engage in talks about North Korea’s nuclear program even as it maintains pressure on Kim Jong Un’s regime, the Washington Post reported, citing an interview with Vice President Mike Pence.

Pence and South Korea’s President Moon Jae-in agreed on a post-Olympics strategy during conversations at the Winter Olympics in the South Korean resort of Pyeongchang that Pence dubbed “maximum pressure and engagement at the same time.” Pence spoke in an interview on his way home from the Winter Olympics.

“The point is, no pressure comes off until they are actually doing something that the alliance believes represents a meaningful step toward denuclearization,” the Post quoted Pence as saying. “So the maximum pressure campaign is going to continue and intensify. But if you want to talk, we’ll talk.”

The comments represent a departure from the Trump administration’s previous stance that it would not engage in any dialogue with North Korea unless Kim Jong Un’s regime first agreed to the goal of denuclearization. Pence endorsed a post-Olympics engagement after Moon assured him that the North Koreans wouldn’t get economic or diplomatic benefits for just talking — only for taking concrete steps toward denuclearization.

“I think it is different from the last 20 years,” Pence said, according to the Post. When asked what exact steps North Korea would have to take to get sanctions relief, he said: “I don’t know.”

Kim’s sister, Kim Yo Jong, delivered a letter inviting Moon to a summit in Pyongyang during meetings held around the opening ceremony of the Olympics. She also asked him to play a “leading role” in reuniting the two Koreas after nearly seven decades. A spokesperson for Moon’s office said that pre-conditions needed to be met before the summit takes place.

The invitation had sparked concern that Kim had succeeded in driving a wedge between South Korea and the U.S., which have differed on the best way to rid North Korea of nuclear weapons. The Post reported that Pence and Moon hammered out the new strategy during conversations at the presidential Blue House and during a speed-skating event. 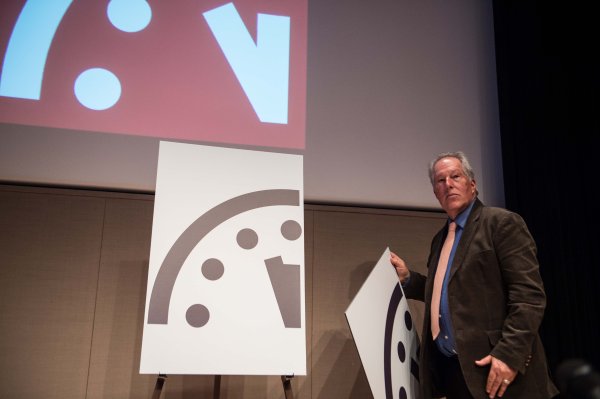 The Nuclear 'Doomsday Clock' Is the Closest to Midnight It's Been Since the Cold War
Next Up: Editor's Pick