The Obamas’ portraits were painted by New York based artist Kehinde Wiley and Baltimore-based artist Amy Sherald. They are the first African Americans commissioned to paint official portraits of the first couple for the National Portrait Gallery. The two artists’ works will be on display at the National Portrait Gallery starting on February 13. Aside from the White House, the Gallery is home to the only complete collection of presidential portraits; according to the Smithsonian, it is comprised of more than 1,600 works.

Each artist has a distinct way of presenting black subjects.

Wiley, who painted President Obama, is best known for his vivid depictions of people of color. His most famous collection features young black men— “street cast” on the sidewalks of New York— in grand scenes and poses that mimic the works of classical Western artists. His work has offered a stylized blend of the old and the new, and is often meant to challenge perceptions of black people, particularly the young black men who live in urban centers of the U.S.

“I tried to negotiate less gray hair, smaller ears,” Obama joked at the unveiling. “Maybe the one are where there were some concessions … his initial impulse may be in the work may be to elevate me … mounting me on horses … and I had to explain I’ve got enough political problems without you making me look like Napoleon.”

Obama called the process of sitting for a portrait “torturous,” noting that as far as he knows he’s the first person in his family to have a portrait done.

Kehinde, who noted that he was “humbled” by the invitation to paint Obama, said that he backdrop includes flowers from Chicago, Kenya and Hawaii as a way of showing the president’s background.

Though lesser known than Wiley, Sherald is a rising star in the art world. In 2016, she became the first woman to win the National Portrait Gallery Outwin Boochever Portrait competition, beating 2,500 other entries. She was also recently awarded the High Museum of Art’s David Driskell Prize.

Bold colors and patterns are a constant in Sherald’s work — from the bright red fascinator adorned by the young Miss Everything to the multi-colored print dress that pops from the canvas of her 2017 work, Untitled — but the skin of her African American subjects is often presented in varying shades of gray. She has also been said to seek out subjects who she sees as “existing in the past, present, and future simultaneously,” according to Artnet.

Though she did not choose the First Lady as a subject, in an interview with the New York Times she described her as “an archetype that a lot of women can relate to — no matter shape, size, race or color. We see our best selves in her.”

Since the administration of President George H.W. Bush, the National Portrait Gallery has been commissioning portraits of American presidents. In 2006, starting with former Secretary of State Hillary Clinton, the gallery also began commissioning portraits of the First Lady. President Obama’s portrait will be on display in the recently renovated “American Presidents” exhibit on the gallery’s second floor.

Former First Lady Michelle Obama’s portrait will be hung somewhere else in the museum. 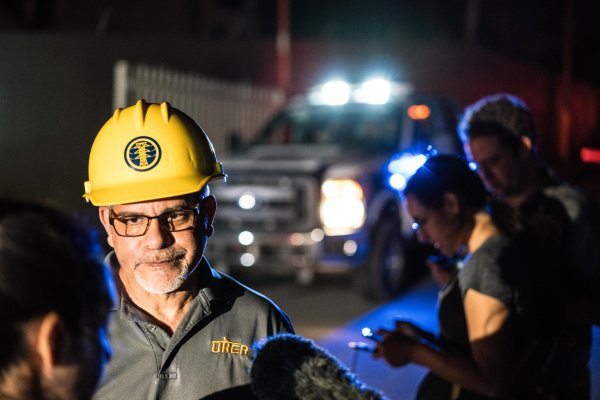 Puerto Rico Is Facing a Major Blackout After a Power Station Exploded
Next Up: Editor's Pick