Weldon is the author of memoirs I Closed My Eyes and Escape Points. She is emerita faculty at Northwestern University, senior leader with The OpEd Project and editorial director at Take The Lead.

“Of course it won’t happen to me.”

That was the response from the new fiancé of my ex-husband, who was a charming litigation attorney, the father of my three young children and a batterer. His fiancé was a very successful professional and the mother of a young son. I felt it was my obligation to warn her face to face, woman to woman.

“You need to read the court files. You need to know so this does not happen to you or your son.”

It was 1995 and I stood feet from her in the quiet suburban street outside my children’s therapist’s home; my older two boys, then six and four years old, had just finished a session, a practice that began after their father was removed from our house by an emergency order of protection.

I locked eyes with her standing outside her SUV as my children left for a visitation with their father. He stood next to her, impervious and defiant.

Her response seemed to me deliberate and shaming. As if she was saying it wouldn’t happen to her, she was too strong and too confident to become a victim. What I felt she implied was that there was something wrong with me that transformed him into an abuser. I must have made him angry or brought out the worst in him; it was my fault.

It’s what we do as a culture. It’s what women sometimes do to each other: shame and blame the women who fall for batterers. They must have low self-esteem or feel they deserve to be treated badly, we think. And if there was no history of abuse prior to this relationship, then she created the aberration.

Recent revelations from both ex-wives of Rob Porter, the White House senior aide who resigned this week after being accused of domestic violence, are echoed by countless women every year who enter into relationships with men who become violent or have a history of violence. Porter has called the allegations “outrageous” and “simply false.” According to the Centers for Disease Control, in this country, one in three women have experienced some form of physical violence at the hands of an intimate partner. CNN and Politico have reported, citing people familiar with the situation, that White House Communications Director Hope Hicks has been in a romantic relationship with Porter. I hope that Hicks has removed herself from the relationship.

Many women feel “powerful enough” to change an abuser. I know I did. I was in marriage counseling with my former husband for all nine years of our marriage; I thought he would want to fix his behavior for the sake of his family, for himself and for me. Many batterers are master manipulators and gaslighters who count on being unpredictable. I had never encountered a personality like my ex-husband’s, and didn’t realize how little I could do to change it until after I had tried for years.

And the partners of batterers often have very similar experiences. I know that I experienced episodes eerily akin to those described by Porter’s former wives. Abusers count on their partners staying silent and having little evidence to prove what’s happening behind closed doors. They bank on a cycle of shame.

Porter’s first wife, Colbie Holderness, told the Intercept in an interview, “He would get angry and throw me down on a soft surface — to his credit, it was always a soft surface like a couch or a bed — and he would lay on top of me shaking me, or rubbing an elbow or a knee into me. He graduated to choking me, not ever hard enough to make me pass out, or frankly to leave marks, but it was frightening and dehumanizing.”

Jennifer Willoughby, Porter’s second wife, wrote a 2017 blog post detailing the abuse she says she suffered and which she has since confirmed was about Porter. “When I tried to get help, I was counseled to consider carefully how what I said might affect his career. And so I kept my mouth shut and stayed,” she wrote. “I was told, yes, he was deeply flawed, but then again so was I. And so I worked on myself and stayed. If he was a monster all the time, perhaps it would have been easier to leave. But he could be kind and sensitive. And so I stayed. He cried and apologized. And so I stayed. He offered to get help and even went to a few counseling sessions and therapy groups. And so I stayed.”

Officially, White House Chief of Staff John Kelly damned domestic violence as “abhorrent,” and said it has “no place in our society.” But the inclusion of men with histories of abuse in powerful positions speaks otherwise. Both of Porter’s ex-wives said they revealed his abuse when interviewed by the FBI about his security clearance last year. And President Donald Trump has come out in support of Porter, encouraging reporters to remember that he denies the allegations. What continues is a unilateral blaming of women — whether they stay or go.

We need to be more understanding of the power dynamics within abusive relationships and not leave the onus on women to silently navigate their exodus. Beginning early, we need to teach boys and girls how to communicate non-violently through conflict in a way that allows both to be equal partners.

We need to shine a light on violence and place the responsibility on abusers to conduct themselves without hurting others. And we need to hold them accountable. If we fail at this, we end up where we are today — with abusers in positions of power, allowed to run our country without suffering consequences from their actions. 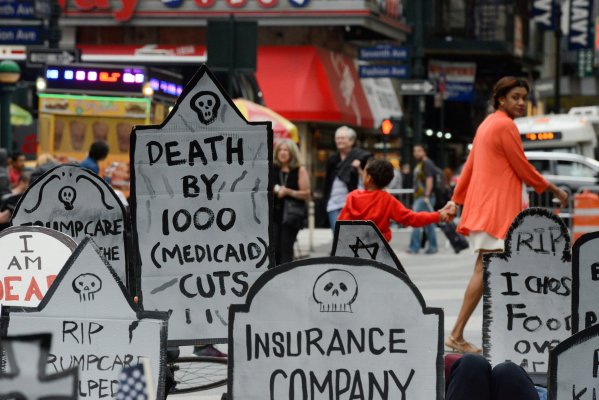