As President Donald Trump has stocked federal appeals courts with a record-breaking number of conservative judges, the decision by a veteran Republican to break with recent Senate tradition has helped smooth the way.

As chairman of the Senate Judiciary Committee, Iowa Sen. Chuck Grassley decided to overturn an unwritten rule that both home-state senators had to consent to a judicial pick for it to move forward. Using paperwork known as “blue slips,” senators from the minority party could use the process to halt the president’s more controversial judge picks.

Last week, the Senate confirmed 8th Circuit Judge David Stras, the first nominee seated since Grassley loosened the blue slip rule. (Former Democratic Sen. Al Franken of Minnesota, who has since resigned over a sexual misconduct scandal, had announced that he opposed Stras last fall because he was too conservative.)

In an interview with TIME, Grassley defended the decision, arguing that the blue-slip policy was not a formal rule, although his immediate predecessor, Democratic Sen. Patrick Leahy of Vermont, had an absolute policy that he would not move forward on a nomination without the consent of both home-state senators.

“If you’re going to look at a blue slip policy, you look at it as a chairman’s use of it,” Grassley told TIME in his office last month during an interview for a story published this week. “It’s a very important part of the process,” he added, “but it’s not entirely definitive.”

On this, Grassley and Majority Leader Mitch McConnell agree. In a separate interview with TIME in January, McConnell said his view is that “the blue slip tradition ought not to apply to circuit judges.” (As opposed to district judges, on which home state senators usually get more say.) Blue slips “ought to be treated as a notification of how you’re going to vote,” McConnell said, “rather than a blackball.”

Stras was not the only judge to move ahead under the change in policy. Grassley also held a hearing for 7th Circuit nominee Michael Brennan at the end of January despite not receiving a blue slip from Democratic Sen. Tammy Baldwin.

Democratic senators were upset by the change. In a statement about the Brennan hearing, Leahy argued that Grassley’s interpretation of the policy would do “lasting damage” to the confirmation process.

“I never believed that protecting blue slips was a partisan issue,” Leahy said in a statement about Brennan’s hearing. “To me, it was always about protecting the prerogatives of home state senators. That means all senators, Republican and Democrat. Apparently, home state senators have no such prerogatives in this Congress—if they happen to be Democrats. I fear this will do lasting damage to the integrity of this Committee’s judicial confirmation process.”

After Stras’ confirmation, Sen. Dianne Feinstein of California, the ranking Democrat on the Judiciary Committee, argued the rule change would lead to the Senate becoming a “rubber stamp” for the White House’s picks.

For Democrats, not honoring the blue slip tradition on appellate judges takes significant power away from the minority party. But talking to TIME in January, Grassley noted the difficulty in maintaining an absolute policy on the other side: potentially ceding too much power to a minority party in an obstructionist mood.

“You kind of get the feeling that the leadership of the Democrat caucus,” he said, “would want to not have any of them return a blue slip.”

Grassley’s decision to move forward on circuit nominations without both blue slips is just one element of how Trump was able to confirm a record number of appellate judges in his first year as President. 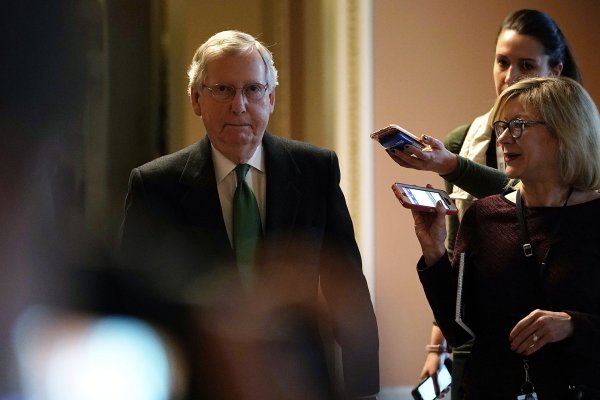 Rand Paul Leads a Last-Minute Fight Against the Budget Deal
Next Up: Editor's Pick