5 Things to Know About Yuna Kim, Lighter of the Olympic Cauldron

It’s the highest honor bestowed during an Olympic opening ceremony. Every four years, a competitor from the host nation is chosen to light the Olympic cauldron, the climax of the entire ceremony. For the 2018 Winter Olympics in PyeongChang, South Korea, the athlete chosen was figure skater Yuna Kim, a hugely popular figure known in South Korea as “Queen Yuna.”

On Friday, Kim performed a short skating routine for the crowd before she was handed the torch, with viewers praising Kim for appearing on skates.

So, who is Yuna Kim? Here’s what you should know about her.

Kim Yuna of South Korea celebrates winning the gold medal in the Ladies Free Skating during the medal ceremony on day 14 of the 2010 Vancouver Winter Olympics at Pacific Coliseum on February 25, 2010 in Vancouver, Canada. (Photo by Cameron Spencer/Getty Images)
Cameron Spencer—Getty Images

Kim is a household name in South Korea. Kim won the gold medal at the Vancouver Games in 2010, before winning silver in Sochi in 2014.

Kim’s performance in 2010, when she became the first South Korean skater to win gold, followed a dramatic showdown between herself and longtime rival, Japan’s Mao Asada.

After making the sign of the cross, Yuna Kim delivered a record-making routine set to Gershwin’s “Concerto in F.” The performance earned Kim the highest point total of any woman so far under the current scoring system, in place since 2006, despite Asada performing two high-scoring triple Axel jumps.

2. Yuna Kim’s silver medal in 2014 was a source of controversy

Whispers circulated that Russian Adelina Sotnikova‘s gold medal score had been inflated. Kim announced her retirement from the sport shortly after.

Yuna Kim is well known for her balletic moves, while her wholesome, girl-next-door public persona has led to lucrative deals and endorsements; Yuna Kim has appeared in various commercials on Korean television. She was also featured on Forbes’ list of the world’s highest-earning female athletes.

4. Other figure skaters love her

Yuna Kim was profiled for the TIME 100 in 2010 by U.S. skater Michelle Kwan, the most decorated figure skater in U.S. history.

“Kim’s inspiring performances in Vancouver changed the face of figure skating forever,” Kwan said. “Those 6½ minutes on the ice left not only a mark in the record book but also an indelible impression on millions of young girls around the world.”

On Friday, Kwan expressed on Twitter her delight at seeing Kim light the Olympic torch. She also posted an image of the pair skating on Instagram.

5. Yuna Kim is also a philanthropist

Yuna Kim was appointed a UNICEF Goodwill Ambassador in 2010, and has participated in relief efforts in Haiti, Japan, and the Philippines. In May 2011, Kim donated her silver prize money of $27,000 from the World Figure Skating Championships to victims of the Japanese earthquake. 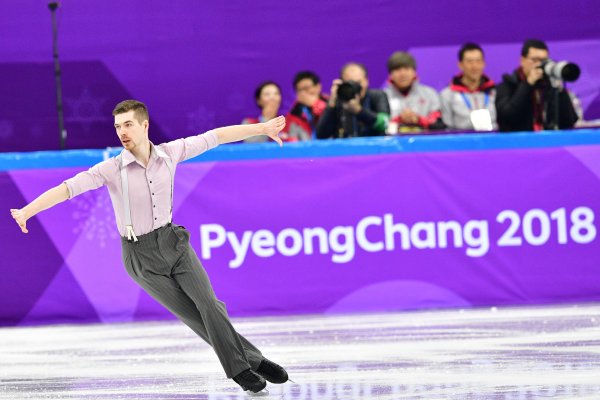 A Jazz Version of ‘Wonderwall’ Is the Olympic Figure Skating Meme the Internet Needed
Next Up: Editor's Pick