Harley Windsor Is Making History as Australia’s First Indigenous Winter Olympian. Here's What to Know About Him

Ekaterina Alexandrovskaya and Harley Windsor of Australia perform their routine in the Gala exhibition during the ISU Junior & Senior Grand Prix of Figure Skating Final at Nippon Gaishi Hall on December 10, 2017 in Nagoya, Japan.
Atsushi Tomura - ISU—ISU via Getty Images
By Samantha Cooney

The 21-year-old athlete will compete in figure skating pairs with Russian-born Ekaterina “Katia” Alexandrovskaya. Windsor, who fell into the sport by chance, overcame financial challenges and bullying to make it to the big stage in PyeongChang, South Korea.

Here’s what to know about Windsor’s journey to the 2018 Winter Olympic Games.

Windsor, the youngest of nine siblings, was raised in an aboriginal community in a Sydney suburb called Rooty Hill, according to the Sydney Morning Herald. He grew up doing aboriginal dances.

When he was 9, his mother got lost while driving and stopped at a fast-food restaurant to get her bearings. Windsor noticed an ice skating rink across the street, and asked his mom if he could try skating. Windsor and his mother quickly discovered he was a natural skater, according to the Morning Herald.

Windsor, coached by Russians Galina and Andrei Pachin, won his first championship a year later, and competed in his first international competition at age 12, according to the Morning Herald.

His mother, Josie, worked multiple jobs to pay for her son to participate in the costly sport, according to Reuters. His mother couldn’t afford to attend the 2018 Winter Olympics, but an Australian TV channel paid her way to South Korea.

Though Windsor initially competed in singles, a growth spurt made it difficult for him to continue to compete alone, according to BBC. Figure skaters are typically short and light in weight, which allows them to jump high and control their bodies. So Windsor started looking for a doubles partner.

“That was difficult because there aren’t many girls who are interested in the pairs in Australia at elite level,” Windsor told BBC. “At that point I started to lose passion and I wasn’t competing. I thought I was going to quit skating.”

But in 2015, his coaches flew to Russia and found him a partner in Alexandrovskaya, who didn’t speak any English but skated well with the Australian. Alexandrovskaya got her Australian citizenship a few months ago, according to the Herald. In September 2017, they became the first Australian pair since 1998 to qualify for the Winter Olympics.

Windsor embraces his heritage, but he told BBC that he’s been called names and been the target of ignorant comments.

“You have those people that will question my lighter skin, saying ‘he’s not indigenous,'” he told BBC. “There will be somebody who will make a smart comment about it. Racism is still a big issue in this country, but it’s better than it used to be.”

While over 50 indigenous Australian athletes have competed at the Summer Olympics, Windsor is the first to participate in the Winter Games. He hopes his Olympic journey will inspire indigenous athletes to get involved in winter sports.

“I really want to sort of be a, I guess, a role model to just encourage other people that it is possible to do these things,” Windsor told Reuters. “I’ve shown that it’s not easy but it’s definitely do-able.” 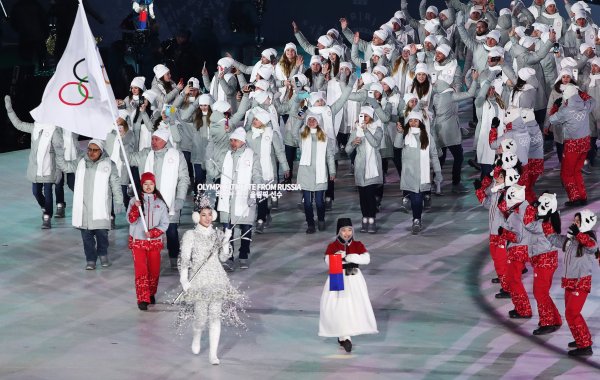 Why Is There An OAR Team in the 2018 Winter Olympics?
Next Up: Editor's Pick