Prince William Spoke Out Against Unrealistic Beauty Standards: 'The Touched-up Pictures Are Not Real.'

Prince William has some strong thoughts on how social media and Internet culture are affecting young people today.

According to The Telegraph, the royal made a surprise appearance at London’s Burlington Danes Academy on Thursday, where he used a speech about cyberbullying to speak out against aspiring to look like women on social media and online.

“I worry for you girls,” he said. “The touched-up pictures are not real,” he said. “Don’t try to recreate them or think that’s what you’ve got to aim for. There’s a lot of fakeness online so don’t worry about that.”

Besides addressing body image, Prince William also touched on the challenges of coming of age in the Internet era, stressing that mental health involves unplugging from time to time.

“Don’t spend all day online. Seriously, don’t,” he said. “For your mental health, get outside, come away from the screen. By all means, be on a screen but don’t be on it all day because it will only bring you into another world. It’s important that you balance the time.” 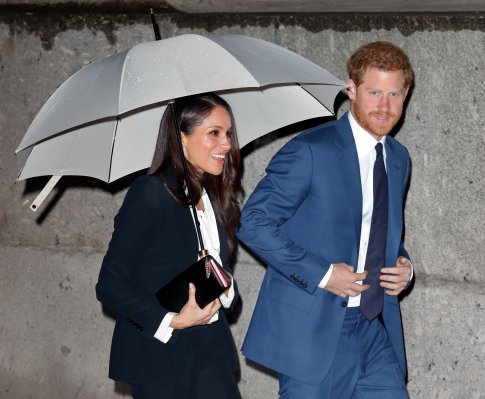 Where Meghan Markle and Prince Harry Will Spend Valentine's
Next Up: Editor's Pick