The Philadelphia Eagles Finally Ended Their Super Bowl Drought. These 4 Teams Could Be Next

Not even the most blindly loyal Philadelphia Eagles fan saw this coming. After quarterback Carson Wentz tore his ACL in December, Philadelphia’s hopes for its first Super Bowl title rested on backup Nick Foles, a once-promising starter whose career seemed destined for journeyman status. Now, after Philadelphia’s thrilling 41-33 win over Tom Brady and the New England Patriots on Feb. 4, Foles is Super Bowl MVP, and the City of Brotherly Love has its first Vince Lombardi Trophy.

For millions of long-suffering fans across the country, Philly’s win offers hope that their team’s drought will be next to end. After all, there’s a depressing number of teams that have never won a modern championship. The St. Louis Blues, for example, entered the NHL in 1967, but they’ve never sipped from the Stanley Cup. The Rochester Royals won the NBA title in 1951 before moving through Cincinnati and Kansas City (with a few years of partial residence in Omaha) and then settling as the Sacramento Kings in 1985—without another win. The Montreal Expos cum Washington Nationals have played in just a single league championship series since 1969, never mind a World Series. The Cleveland Browns, meanwhile, just finished this season 0-16, which doesn’t bode well for their odds of following Philly’s lead to their first title.

But hope springs eternal, and these teams in each top league have the best reasons to believe they are next.

Lost four Super Bowls in the ’70s, but the best shot to win it all came after finishing 15-1 in ’98, when Atlanta upset the Vikes in the NFC championship.

After finishing this season 13-3 and falling one game short of the Super Bowl, the Vikings and their stout defense are battle-tested and built to win.

Held a 3-1 lead over the Houston Rockets in the ’15 conference semifinals before blowing the series.

The team began a necessary roster overhaul by trading star Blake Griffin to the Detroit Pistons on Jan. 29—if that is managed well, the Clippers could rise as the dominant Golden State Warriors start to age.

Scored three runs in the eighth inning to tie Game 7 of the ’16 World Series, before falling to the Cubs in extra innings.

Won 102 regular-season games in 2017, but fell to the New York Yankees in the playoffs. Manager Terry Francona is an expert at ending hexes: in ’04, he led the Boston Red Sox to their first title since 1918.

Lost Game 7 of the 1993 conference finals, 5-4, to Wayne Gretzky and the Los Angeles Kings.

Young center Auston Matthews, the top overall draft pick in 2016, is a franchise-making player. Plus, a Canadian team, which hasn’t won the Stanley Cup since ’93, is due. 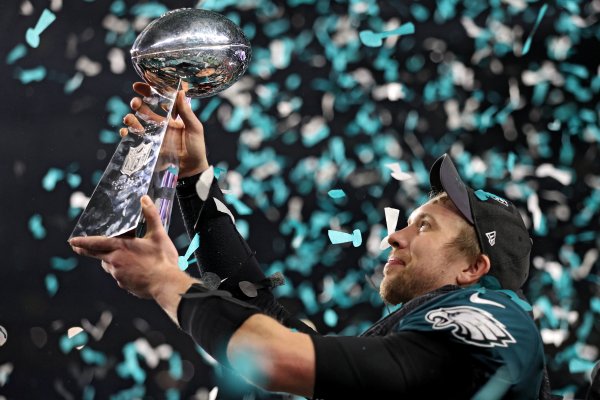 How to Watch the Philadelphia Eagles' Super Bowl Parade Live
Next Up: Editor's Pick