John Oliver Wants Meghan Markle to Rethink This Whole Royal Family Thing: 'It's Going to Be Weird for Her'

As late night television’s resident British person, John Oliver has a little advice for Meghan Markle about her decision to join the royal family—don’t do it.

“I would not blame her if she pulled out of this at the last minute,” Oliver said on Wednesday night’s episode of The Late Show. “I don’t think you need to have just seen the pilot episode of The Crown to get a basic sense that she might be marrying into a family that could cause some emotional complications.”

Despite his status as an American, Stephen Colbert defended the royal family, pointing out that the younger members seem to be a much more well-adjusted bunch. Oliver wasn’t buying it, though. “I mean, they’re an emotionally stunted group of fundamentally flawed people doing a very silly pseudo-job,” he grumbled. “That’s what she’s marrying into. So I hope she likes it. It’s going to be weird for her.”

While Oliver admits that he likes royal weddings (“It’s a spectacle, it’s something nice to look at.”) for his part, he would never consider joining the that crowd. “I would not marry into the royal family,” he told Colbert. “I’m a commoner; I would not be welcome—especially after what I’ve just said.”

This isn’t Oliver’s first jab at monarchies in general and the British royal family, in particular. On his own talk show, Last Week Tonight, he once said: “The gene pool of European royalty is so small, the only difference between [a royal wedding] and an Alabama wedding are the amount of paper plates at the reception, and how drunk the violin player’s going to be.” 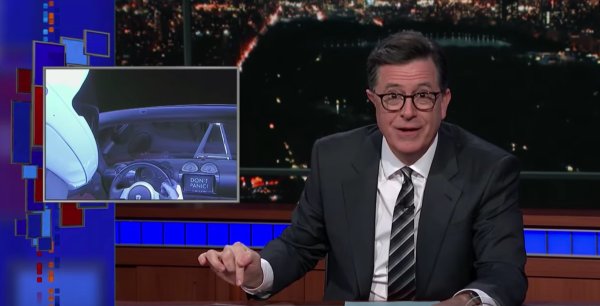