As the Koreans Share an Olympic Moment, Trump Risks Irrelevance

A South Korean soldier stands guard inside a Joint Security Area conference room at the border village of Panmunjom in the Demilitarized Zone between South and North Korea on Feb. 7, 2018.
Carl Court—Getty Images
By Ian Bremmer

Vice President Mike Pence is planning to attend the opening ceremony of the Olympics on Feb. 9 with an unusual guest in tow: Fred Warmbier, father of American student Otto Warmbier, who died last year just days after being released from a North Korean jail. Team USA comes to PyeongChang ready to compete, including in politics.

It’s a provocative move, especially in the context of the recent thaw in relations on the Korean Peninsula–the same thaw that President Trump was taking credit for less than a month ago. But in the State of the Union, he returned to form: “We need only look at the depraved character of the North Korean regime to understand the nature of the nuclear threat it could pose to America and to our allies.” Pence built on the theme upon his arrival in Asia, unveiling what he called the “toughest and most aggressive” sanctions on North Korea yet and pledging to isolate the rogue state until it abandons its nuclear-weapons programs “once and for all.”

But if the U.S. is interested in a long-term, sustainable solution with North Korea, many experts say demanding denuclearization from a regime that sees nuclear weapons as its only lifeline is folly. The U.S. has a history of willfully ignoring facts on the ground, to its own detriment (think the “Assad must go” policy from 2011). If the U.S. is serious about reaching a diplomatic solution to the Korean impasse, it may well have to stomach a nuclear Pyongyang. Truth be told, that reversal should be much easier for Trump than any of his predecessors, given his penchant for flipping on U.S. policy positions and a decided lack of interest in promoting human rights. The biggest obstacle standing in Trump’s way is his ego. Admittedly, it’s a pretty big obstacle.

Not all is lost for a diplomatic solution on the Korean Peninsula even if the U.S. refuses to change tack. China–which is responsible for some 90% of North Korea’s total trade and the majority of its food and energy–has taken a more active role in dealing with the North Korean threat. Some of that has to do with pressure from the U.S., which has made clear that good relations with Washington are dependent on Beijing’s helping resolve the standoff. But just as important is the fact that China now sees itself playing a global leadership role, and it’s difficult to live up to those expectations when it can’t even keep the peace in its own backyard.

Besides, China needs few incentives to ensure that things with North Korea don’t spiral out of control. The collapse of the Kim Jong Un regime would be a disproportionately large headache for Beijing, because tens of thousands of desperate North Korean refugees would stream into China. Beijing also fears that the U.S. military would use the collapse of North Korea as an excuse to set up more permanent shop on the Chinese border. And that’s before we get to the prospects of loose nukes up for grabs.

So too South Korea, which under the leadership of progressive President Moon Jae-in, has decided to engage more proactively with North Korea–hence the Olympic truce, which Kim appears to be taking seriously. (He is even sending his sister Kim Yo Jong to the Games.) The previous two South Korean conservative governments had fallen in line with the hard-line U.S. stance toward Pyongyang. Moon, who genuinely believes in acting constructively with North Korea, has bucked that trend. But it’s not lost on South Korea that the White House can’t exactly be counted on to uphold long-standing alliances. While Trump bemoans the threat of North Korea, he also hammers away at South Korea over a bilateral 2012 trade pact he has derided as a “horrible deal.” Rather than rely on a mercurial U.S. President, Seoul recognizes that it must be proactive in determining what happens on the Korean Peninsula.

As for the U.S., it has a choice to make. It can accept that a nuclear North Korea is a fact of life and start working to decrease tensions on the Korean Peninsula, or it can stick to its guns and contemplate any number of “bloody nose” strategies in the hope that a limited show of force doesn’t set Kim off. Trump’s stated foreign policy of “principled realism” may compel the U.S. accepting an unpleasant reality, or risk losing its seat at the negotiating table–just like it did in Syria. 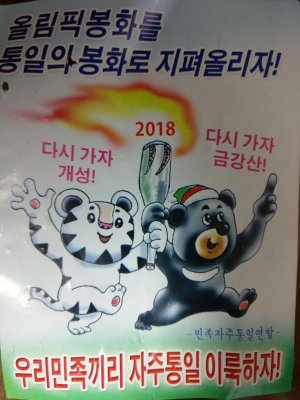 North Korea Drops Propaganda In South Before Olympics
Next Up: Editor's Pick