'We’ve All Come a Long Way.' The xx Talks Sexuality, Sobriety, and Friendship

The xx perform at the AsiaWorld Expo in Hong Kong as part of their 'I See You' Tour on Feb. 1.
Aria Hangyu Chen
By Casey Quackenbush / Hong Kong

Jamie xx has a new skateboard. The British DJ and producer (née Smith) picked it up in Thailand on the previous stop of The xx’s first full-fledged Asia tour for their new album, I See You (2017), and practices backstage before the band’s Hong Kong show. His tricks echo through the arena of AsiaWorld Expo, ramping up as he rumbles right into bassist-vocalist Oliver Sim, grabbing his blue fur-collared bomber jacket to brake. Laughing, they disappear into the dressing room where Romy Madley Croft completes the picture in her signature all black, Doc Martens, and headphones.

“Jamie and I’s friendship from the early years was based around skateboarding … just going off on adventures and being very free,” Madley Croft tells TIME, tracing the band’s childhood origins. From beneath her black geometric haircut, the vocalist-guitarist recounts how she and Jamie used to swap skate videos with music and meet early in the morning in London’s Southbank. “We just skated together and had that world.”

Now in their late twenties, the indie-electronic band is all grown up. Most known for “Intro,” “Crystallized,” and “Angels,” the London-based trio has been a sensation since its debut self-titled album (2009), whose intimate minimalism went platinum and won them the U.K.’s Mercury Prize. But the childhood best friends were barely 20 years old then, shy, and reluctant to open up about their melancholic music. They were still so after their sophomore album, Coexist (2012)—which was also a success but only a gentle expansion of their brooding melodies.

I See You (2017) marks a real transformation—as individuals, as a band, as friends. In the last five interim years, the band drifted and did not see each other much. Madley Croft got engaged to her girlfriend and faced immediate family bereavements, Smith launched an awesome solo album, In Colour (2015), and Sim got sober.

Their new music is still wistful. But with a heavier dose of confidence and pop, on songs like “On Hold” and “I Dare You,” the sadness can be danced away.

TIME caught up with the xx before their gig in Hong Kong.

Your music is generally very melancholic, but “I See You” is noticeably more uptempo. How has your music evolved?

Madley Croft: I like that you picked up that it’s more uptempo. That is something we were conscious of in reaction to Coexist, which we love but was quite fragile at times. With this album we thought from the offset it would be great if we had some more danceable moments, and Oliver and I were inspired by what Jamie was doing with his solo project. It has been fun having a song like “On Hold” in the set where people are just dancing and singing.

Jamie, your last album, In Colour, was inspired by British club culture. How do you marry that with the really emotional songs of your bandmates?

Smith: We’re all massive fans of dance music that has an emotional content and that juxtaposition is one of our favorite things in songwriting. So when it came to asking these guys to write songs for my album, it just seemed to make perfect sense.

There’s a lot of pain in your music. Do you feel that every time you perform?

Madley Croft: Yes. We have a song called “Brave For You” which is actually really hard for me to sing. But it is incredibly cathartic as well.

Madley Croft: “Brave For You” is a very personal song to me. It’s the first song [in which] I’ve been more open about losing my parents and the way I kind of choose to live my life and not be sad—trying to just go forward and do things that scare me. I was trying not to write so much about heartache on this album.

Your album’s single, “On Hold,” came out the day after the U.S. election, and you considered moving it, but decided against it. What you were thinking at that moment?

Smith: We were thinking, “damn, that’s bad timing,” especially because the music video for that was filmed in Texas and it was very Americana based, which we love, but we also felt like with what was going on in America, it just was bad timing. We actually moved the video back a little bit just to give it some space.

There’s a lot of crazy stuff happening in the world right now. Has any of that influenced your music?

Madley Croft: Yeah the world is a crazy place right now. It has been quite extreme for me. I find I get quite anxious traveling. Touring in the U.S., and all that went on in Vegas, it’s definitely hard to not be psychologically affected by it going on stage. But then seeing all the people in the audience, it gives me courage. It’s just amazing people aren’t letting [fear] win.

Sim: My dad said something so nice to me, after Brexit before the elections. I remember speaking to him and feeling incredibly down. And he was, like, “the real silver lining is, think about all the arts and music and literature that can come out of something like this.” Going back to punk—punk came out of Thatcher’s reign. A lot of people were angry, and he was like “just think about all of that stuff you have to look forward to, and all of the stuff you could be making as well.” I thought it was a nice way of looking at a difficult situation.

Oliver you once described your music writing as “quite like a queer space.” Can you elaborate on what that means?

Sim: I think that’s one thing we’ve been conscious about: keeping our music as universal as possible. So we have stayed away from using pronouns or time or place because I want people wherever they are, whenever, to be able to connect. But I actually maybe don’t stand behind that as much anymore. I think there are some people that would appreciate me basically speaking up a bit more, especially people in the queer community. So I’ll see if that changes.

Gay relationships also play a big role in a lot of your newer music videos, and on social media, you regularly promote your partnerships with LGBTQ charities. Do you consider yourselves a voice for the LGBTQ community?

Madley Croft: Yeah the LGBTQ community is incredibly important to us, Oliver and I both being queer. We’ve recently started doing more charity work and it’s been really wonderful. It gives me a lot of courage to be more visible. In the beginning I didn’t feel so comfortable being so open about it. But now hearing that it does mean things to young people, to be open about your sexuality, is wonderful. I wouldn’t say it was out of shame that we weren’t really visible, it was just shyness. We were pretty private about most things in our lives at that point.

Oliver, “Replica” is a song written and sung by you about your relationship with alcohol. How does it feel to address that in a song?

Sim: For however many years it took to write this album, a lot of stuff came to the surface about my addictions and my drinking and yeah, it came into the music. Another thing that my dad has taught me is that the one way you can combat shame is just talking about it. Putting it into a song is that times a million. But it really has helped me. The cherry on top is that if I’m putting it into a song and someone else is able to connect and feel less stigma, less alone, then I feel incredibly happy. But primarily without sounding selfish, it was for myself.

Is it tough being sober on tour?

Sim: Sobriety is definitely hard. I’m not going to paint it out to be easy. And it’s been quite up and down. But you know I found things like performing—performing is the greatest high of all. And especially with alcohol, I was drinking a lot to dampen a lot of the nerve I felt, but I didn’t realize I was capping a lot of the highs. So doing this again, coming back into this sober, has been so hard, but so gratifying because I come off stage and I’ve been completely present. I can remember everything and I’m reaching greater highs.

Smith: I think just confidence. I understand myself a little bit better.

Sim: I remember having a conversation with Jamie when we were about 13, maybe like 14, and it seems pretty intense and dark for a 14-year-old, but he was like, “I think I’m at peace with the fact that I’m not going to make big waves in the world.” And I was like “Ahh! Ow!” And he was like, “No, no, it’s fine it’s fine. I’m just at peace with it.” Yeah so he was definitely—we all were lacking in confidence. And see what he’s done.

Madley Croft: That’s so sweet. Is that what he said?

Sim: Yeah. So we’ve all come a long way in confidence.

You’ve said it’s nerve-wracking to work with artists you look up to so much. Who have you been most nervous to meet?

Sim: We did a residency in New York at the Armory in 2014, there was only about 40 people, and we were never told who was coming. We were playing a show, I looked at Romy, and dead behind her was Madonna. She was staring me dead in the eye. And she’s terrifying, but I love her. We’re all such big fans. She was one of the scariest people. And you know she didn’t make it easy. But I loved that. She was there in a big long trench looking ominous.

Madley Croft: I agree that was incredible. To look up and to see Madonna staring you in the eyes—like what? Do I just have to really bring it now? What do I do? Some incredible people came to those shows and I feel embarrassed to name drop some of them but they were just icons of like our lives, like Beyonce and Jay-Z and Bjork and Madonna—these people I just couldn’t believe it, that they were coming to see us play. It just felt like are you serious? Even if we did nothing else now, that’s pretty cool to tell your kids.

—With video by Aria Chen 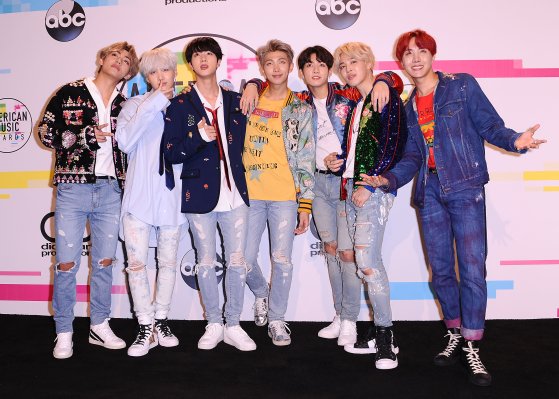 These Are the K-Pop Groups You Should Know About
Next Up: Editor's Pick