An 11-year-old New York boy died Tuesday after rescuing a friend who fell through a frozen pond, police said.

The boy, Anthony Perez, fell into Strack Pond at Forest Park in Queens, New York, authorities said, after rescuing his 12-year-old friend who first fell into the ice, according local news station ABC 7.

The Fire Department of New York said Perez managed to make it roughly 50 feet out on the pond before the ice gave way beneath him. Upon arriving on the scene, two firefighters dived into the pond to rescue the child.

“Members had to physically, with their hands, break through the ice and chop the ice so they could get to the area that they knew the child would most likely be in,” FDNY Deputy Chief George Healy said in a statement.

The two firefighters were taken to a local hospital to be treated for hypothermia. The 12-year-old friend Perez pulled from the ice was not injured.

Healy urged parents to keep their children from walking on top of frozen bodies of water.

“There are signs around all the lakes in the city and we implore you, tell your children — the ice is not safe, it’s not going to support your weight, and it can have tragic consequences,” he said.

“Again, the ice looks to be safe, it looks to be thick, but the temperature today was well above freezing,” Healy added. 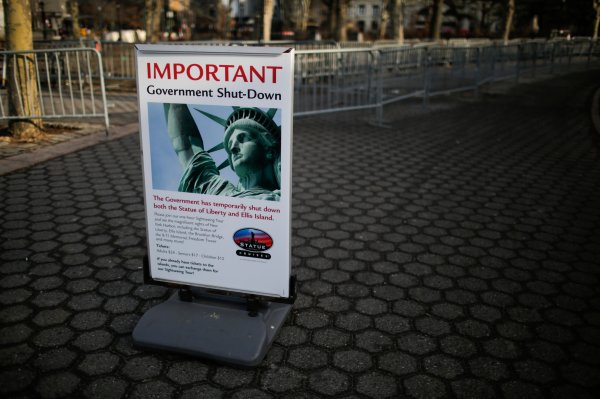 The Statue of Liberty Will Reopen Today Despite the Government Shutdown
Next Up: Editor's Pick