Competitive Video Gaming Could Be the Newest Olympic Sport. Here's What It Would Look Like

The space could pass for a TV control room at any major sporting event. A few dozen workers were wearing headsets, looking at a maze of computer screens. A producer barked directions. But here, footsteps away from the frigid beach in the coastal South Korean city of Gangneung—which is hosting figure skating, hockey and other arena ice events at the 2018 Winter Olympic Games in PyeongChang—NBC wasn’t covering curling. Instead ESL, a company that organizes competitions in e-sports, or competitive video gaming, was streaming the semi-finals of a tournament hosted by Olympic sponsor Intel on the Olympic Channel.

The stakes were particularly high, and not just for the competitors. The International Olympic Committee is considering adding e-sports to the Olympic Games. Yes, video games may soon be an Olympic sport, and two days before the Feb. 9 Opening Ceremonies in PyeongChang, e-sports were getting a trial run.

One control room screen displayed seven different camera angles honed in on Mikolaj Ogonowski — screen name “Elazer” — of Poland, and Canadian Sasha “Scarlett” Hostyn, the lone woman in this pre-Olympic tournament. They were playing StarCraft II, a science fiction strategy game. Two of the shots showed close-ups of a hand of each player, their fingers pounding on a key board like a caffeinated court reporter. “For e-sports fans, watching someone’s fingers move that quickly,” says Mark Cohen, senior vice president of live events and experiences at ESL, “is like watching Usain Bolt run.”

E-sports, which started their rise in 1990s internet cafes of South Korea, are now a $1.5 billion business, according SuperData research. The best players can make millions; tournaments fill arenas around the world. In 2017 people worldwide watched over 266 million hours of professional e-sports competitions involving Dota 2, a popular battle game, on Twitch, the streaming service that Amazon purchased for nearly $1 billion back in 2014. (Twitch also streamed the ESL/Intel StarCraft II event in Gangneung). The NBA will launch its own e-sports league in May.

Amid all this growth, the concept of video games in the Olympics does not sound as crazy as it would have just a few years ago. One challenge for the e-sports advocates: to the uninitiated, games like StarCraft II are much more difficult to follow than, say, curling. Still, Olympic organizers are on a permanent quest to draw younger audiences, and an e-sports competition might outrage your uncle but appeal to millions of engaged, digitally-connected video game fans.

“There’s really no question in my mind that e-sports will be in the Olympics,” says Michael Lynch, head of consulting at Nielsen Sports and Entertainment. Lynch, who used to run Visa’s global sponsorship marketing business, including its Olympics efforts, thinks China — an e-sports power — could push to add competitive gaming to the 2022 Winter Olympic Games, which will be held in Beijing. “It’s not a question of if,” says Lynch, “but of when.”

Read more: The Varsity Sport of the Virtual World

The South Korea event had the trappings of a major athletic competition, minus a crowd of spectators: since Intel only signed as an IOC sponsor in June of 2017, the organizers couldn’t secure a larger venue. So they held the tournament at a wedding hall near the Gangneung coast. But the Olympic rings appeared in the backdrop of the slickly-produced pregame show, no small feat given how closely the IOC guards that trademark. One of the analysts mapped moves on a telestrator. An Intel rep discouraged the media from asking the competitors questions prior to the games, as if they were superstitious pitchers in the dugout before their start. “Please don’t interact with the players,” she said.

Some e-sports stars have trainers, psychologists, and even nutritionists — a sound body can help players focus in front of their screens. “E-sports has all the qualities of a regular Olympic sport,” says gamer Sean “Probe” Kempen, 21, of Australia, who lost in the round of 16 in South Korea. “You need mental skill and physical skill. The physical skill is harder to see, but it’s there,” says Kempen. E-sports requires muscle memory, and hand-eye coordination, to move pieces around the screen and take down your opponent. Kempen, who’s 5’7″ and 121 pounds, compares a gamer twitching a keyboard to the swing of a tennis racket. “The different between a high-level player, and an extremely high level player, is mechanical skill,” he says. “Being quicker than your opponent makes a big difference.”

E-sports is only getting more competitive. “People don’t know that we train five, eight, 15 hours a day,” says Aleksandr “Bly” Svusuyk, of the Ukraine. “One mistake can cost me money and fame.” At 29, Svusuyk calls himself “a grandpa” in the e-sports world. He also points out that he’s married, contrary to the perception that people spending 15 hours a day playing video games must be averse to social interaction.

The reality is that the world’s best video gamers will carry more clout, with more people, than the skeleton gold medalist at the 2018 PyeongChang Games. The Olympics may need e-sports more than e-sports needs the Olympics. “We’re going to keep growing anyway,” says Kempen. “If the Olympics happens, they happen. We have the audience already.”

If the e-sports tournament in Gangneung were an actual Olympic event, fans around the world would have been treated to a monumental upset. “Oh my God, this is pure madness!” the play-by-play announcer said as Sasha “Scarlett” Hostyn beat Yoo Jin “sOs” Kim of South Korea. Kim is the second all-time leading money winner in StarCraft II history — he’s made almost $500,000 in prizes —and Scarlett downed him on his home turf. “I thought I had no chance,” says Hostyn, who won the $50,000 first-place check. “Going in, I was very scared of him.” After the victory, Hostyn chugged some cider with her friends. One day, she might be heading to a podium too, to be draped in gold. 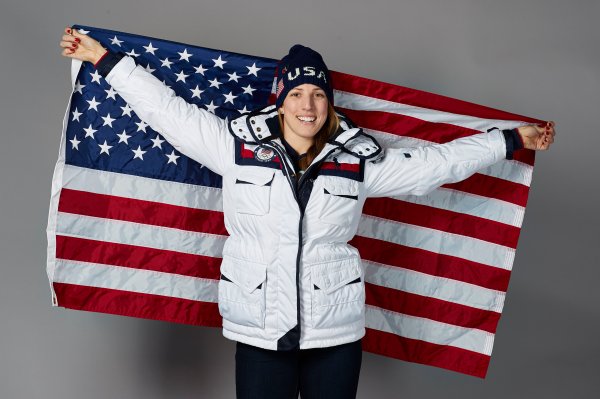 Team U.S.A Has Chosen Its Flag Bearer for the Opening of the Olympics
Next Up: Editor's Pick