While a decision by Hong Kong’s highest appeals court to drop prison sentences for prominent democracy activists was welcomed by human rights advocates and legal observers this week, the ruling raised alarm for the preservation of civil liberties and the independence of Hong Kong’s judiciary.

Hong Kong’s Court of Final Appeal on Tuesday “quashed the sentences of imprisonment” imposed against Joshua Wong, 21, Nathan Law, 24, and Alex Chow, 27, last year, but the ruling was something of a final warning, with a panel of judges also supporting prison terms for future cases of unlawful assembly.

Wong called the verdict a “harsh” judgement that was “sugar-coated.”

“Even if it allows us to walk free out of court and prison, it still fully endorsed strict guidelines on civil disobedience in the future,” he tells TIME.

Rights experts and legal analysts warned the case could have a “chilling” effect, creating a more lenient threshold for jailing dissidents and endangering political liberties. The ruling “set a dangerous precedent for sending people to prison for protesting in the future,” says Maya Wang, senior China researcher for Human Rights Watch.

Willy Lam, adjunct professor at the Chinese University of Hong Kong, says the decision could “be used by police to restrict freedom of expression,” with any public political gathering subject to a “fluid” definition of unlawful assembly. The ruling “definitely could be used against future demonstrations — it’s intended to,” Lam tells TIME.

Wong and Law were initially sentenced to community service, with a suspended sentence for Chow, over a September 2014 demonstration that saw protesters storm into Hong Kong’s government complex. The incident helped spark the Umbrella Movement, a 79-day occupation of the city’s financial and administrative areas, with protesters demanding greater political autonomy.

In what was seen as a highly controversial decision, the Department of Justice retried the case last year, seeking harsher penalties; Wong, Law, and Chow were sentenced to six- to eight- month prison terms.

This week, the Court of Final Appeal ruled that sentence was “retroactive,” but that future offenders will be subject to “new guidelines,” which include harsher penalties for those deemed to be taking part in “large scale unlawful assemblies involving violence.”

Wong is also appealing a three-month sentence under a separate contempt of court charge.

Before the hearing, Alex Chow confessed the trio felt “uncertain” about both the verdict and the future of the democracy movement. “What has happened in the past two months … is totally and completely different from what we’ve seen in the previous years,” he told TIME outside the courthouse. “Room for resistance is shrinking.”

Hong Kong’s pro-democracy groups may find themselves barred from both mainstream politics and public activism, says Craig Choy of the Progressive Lawyers Group, an organization set up by Hong Kong lawyers in the wake of the mass protests. Last month, Agnes Chow, a member of Wong’s Demosistō political party, was prevented from contesting a March by-election. “They are pushed outside the establishment … and at the same time this judgement is limiting their right to peaceful assembly,” Choy tells TIME.

The case has also raised concerns about the health of Hong Kong’s judiciary, a much-lauded institution that is a point of pride in the semi-autonomous territory of China. “Although the Hong Kong judiciary has remained independent, it faces increasing encroachments from Beijing,” says Human Rights Watch’s Wang. When the authorities rely on the judiciary to resolve “politically-motivated prosecutions,” Wang says, “it may, under the broader context of crackdown on dissent, have difficulties safeguarding freedoms.”

The young democracy activists’ case has attracted high-profile international attention. Last week, 12 U.S. Senators and representatives nominated the three, along with the entire Umbrella Movement, for the 2018 Nobel Peace Prize, citing their “peaceful efforts to bring political reform and self-determination to Hong Kong.” 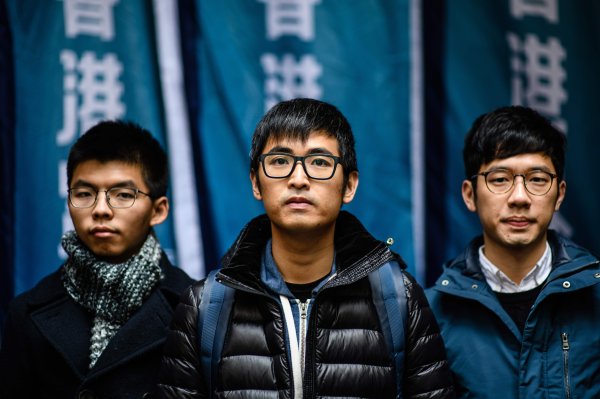