Here’s the Perfect Thing to Say When Someone Is Rude

Getty Images
Ideas
By Danny Wallace
Danny Wallace is the author of F You Very Much: Understanding the Culture of Rudeness—and What We Can Do About It.

Recently, the British IVF pioneer Lord Robert Winston was sitting on a train traveling from London, England, to Manchester, when he found himself becoming steadily enraged.

Winston is normally a fairly mild-mannered man, known for a big mustache and a friendly demeanor. But what was driving him slowly insane as the train rumbled through its two-hour journey was another passenger in particular. Ignoring the child with her, the woman had picked up her phone and begun what would become a very loud conversation, which would take place over several counties and be peppered with tedious facts and banal detail.

Lord Winston tried to ignore it. He did. But there is something fundamentally un-ignorable about a loud, one-sided conversation. Our brains fight to make sense of them, constantly jarred by sudden and randomly timed replies to sentences we can’t hear.

It was then that Lord Winston made a mistake. He began to tweet about the woman. He took photos of her and sent them out to his more than 40,000 followers. He became more and more red-faced and furious as her dominating chit-chat moved from 30 minutes, to 40, then 50, then an unbelievable hour.

When the train arrived at its destination, Winston bolted. He’d had enough of what he described as her “rudeness.” But the woman faced an unusual surprise. The press had picked up on Winston’s tweets. They were waiting for her on the platform, all big smiles and eager anticipation. And when they gleefully showed her the Lord’s messages, the woman’s face fell. And she too used just one word to describe Lord Winston’s actions that day: “rude.”

I’m sorry if this makes me a snowflake, but we find ourselves living at a time of incredible rudeness. Social media has taught the world it needs to have an opinion, on everything, at all times, and that this opinion must be delivered in a forthright way, so we seem assured, confident, smart. Reality television has taught us to celebrate meanness, so long as that meanness is delivered as “honesty” — an awful get-out clause designed by the truly rude so they can say truly rude things and then expect us all to applaud them for it. In Britain, Brexit has divided a people so distinctly that it feels we only need to know how a person voted on one issue to decide whether we like them or not. In the U.S., the rise of the world’s rudest man to the world’s most powerful position has brought into sharp and terrifying focus just how dangerous one moment of rudeness might prove: it might lead us to nuclear apocalypse.

So what can we do about the rising tide of rudeness? Well, we can have the guts to call it out. It’s our duty. Studies have shown that rudeness spreads quickly and virally, almost like the common cold. Just witnessing rudeness makes it far more likely that we, in turn, will be rude later on. Scientists have described it as a neurotoxin, and once infected by it we are more aggressive, less creative and worse at our jobs. The only way to end a strain is to make a conscious decision to do so.

Winston shone a spotlight on that woman’s behavior, but he did not confront it, and he did not stop it. Instead, that flickering spotlight was shone weakly from afar, shaming her, taking an almost rudimentary form of revenge on her.

And revenge is an interesting side effect of rudeness. When someone commits a crime against us — they rob our house, say — we don’t have any desire to rob their house in return. We want justice. But when someone is rude to us, it speaks to an arguably darker side: we want revenge. We want to make them feel the same disrespect they’ve given us. Sometimes we are simply rude in return. But situations can escalate. The rage and injustice we feel at the inexplicably rude behavior of a stranger can drive us to do odd things. In my own research, surveying 2,000 adults, I discovered that the acts of revenge people had taken ranged from the ridiculous (“I rubbed fries on their windshield”; “I let a dog lick a sausage I was serving them”) to the genuinely disturbing (“I slashed their tires”; “I sabotaged them at work”).

Often, the trick to handling rudeness is far more elegant, and can be done with the gentle delivery of a sentence as simple as “Just stop.”

Combating rudeness is something we must do face-to-face. When we see it happen in a store, we must step up and say “Just stop.” If it happens to a colleague, we must point it out. We must defend strangers in the same way we’d defend our best friends. But we can do it with grace. We can handle it well, by handling it without a trace of aggression and without being rude ourselves. Because once a rude person has had the looking glass held up to them and can see their actions through the eyes of others, they are far more likely to end that strain themselves.

This can be done by you, by me, by everyone. But it can also be done in spectacular ways.

The former Mayor of Bogotá, Antanas Mockus, had one such spectacular way. Realizing that behavior in his city was at an all-time low — people parking without thought, not lining up properly, snapping at each other — he had what might well prove one of the genius ideas of our age. He hired an army of mimes.

Yes, an army of mimes.

These mimes were unleashed onto the streets of Bogotá in their traditional mime costumes, and upon spotting rude behavior would simply stand behind that rude person and mimic their rude actions with startling accuracy. Or maybe you’d see someone parking on the sidewalk and not have the confidence to say anything. Don’t worry. Within seconds they’d be completely surrounded by mimes, all pointing and shaking their heads dramatically. And in that moment, a buoyed public would join in too.

Lord Winston could have done with Mockus that day last week. Noise polluters in Bogotá would often find themselves at the center of a large group of people all dressed up as Benedictine monks, each of them holding one finger to their lips to point out how loud they were being.

Surreality aside, what Antanas Mockus did was playfully and powerfully ensure people felt accountable for their actions. He held that looking glass aloft.

We can’t all afford an army of mimes. But we can afford to say something. 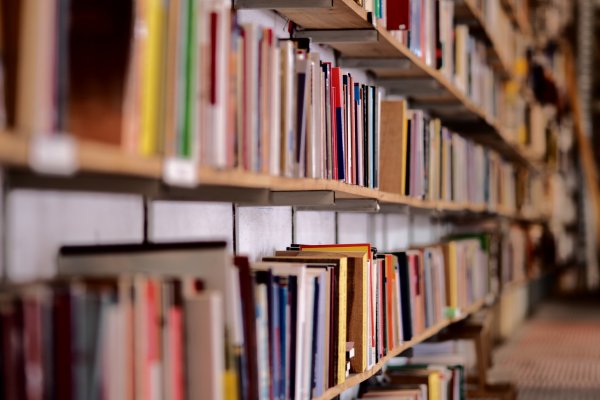 There’s a War on Books in Prisons
Next Up: Editor's Pick