Back in 2015, Stephen Colbert dubbed Elon Musk a potential “super villain,” but on Tuesday night’s episode of The Late Show, he gave the SpaceX CEO a new title—winner of “Most Midlife Crisis.”

Musk earned the …award? in the wake of SpaceX’s successful launch of its Falcon Heavy rocket, the world’s most powerful rocket, boosted by two Falcon 9 rockets, all of which thrilled Colbert. “Here’s the kicker — this is the really exciting part — the launch was to show not only that the Falcon was reusable but the Falcon Heavy can carry a large payload,” Colbert explained on the Late Show. “So to test it, Elon Musk sent up his own Tesla convertible with a dummy astronaut at the wheel, blasting David Bowie’s ‘Life on Mars.’ That’s right, this is absolutely true: A giant phallus cranking rock ’n’ roll, releasing a red convertible into the dark void — and the award for Most Midlife Crisis goes to Elon Musk.”

However, Colbert wasn’t done teasing Musk. Turns out that before tucking his car into the Falcon Heavy rocket, Musk put the words “Don’t Panic” on the Tesla’s screen. “Which as we all know is a reference to Hitchhiker’s Guide to the Galaxy,” said Colbert. “We get it, Musk, you’re King Nerd. I relinquish my crown.” 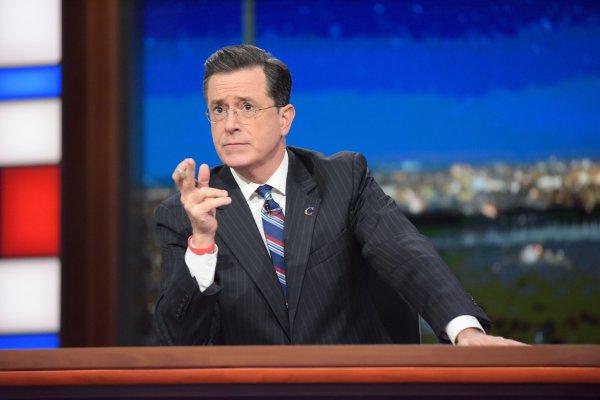 Stephen Colbert Is the Toughest Super Bowl Commercial Critic Ever
Next Up: Editor's Pick