Wendell Pierce, who plays Robert Zane on Suits, stopped by Harry, the talk show hosted by Harry Connick, Jr., and talked about his former co-star’s upcoming party, the royal wedding, of course.

While Markle and Prince Harry tried to keep their relationship hush-hush, her TV dad knew about their developing romance. Pierce told Connick Jr. that he was aware of Markle’s royal romance early on. “She met this nice guy and we always talked about him in code really. You know, ‘How you doing?’ ‘Oh, I’m going to London, coming from London, whatever,’” said Pierce.

When Markle’s engagement was finally formally announced in November, Pierce rushed to congratulate the couple on Twitter, writing: “Harry you have her TV Father’s blessing. Robert Zane approves.”

He also shared the words he shared with Markle on her last day on set. Pierce and Markle had a lot of time to develop a close relationship, as she has played his TV daughter, Rachel Zane, on the USA Network show that premiered in 2011. “I had a really wonderful moment as we were coming to an end of her time on the show,” Pierce told Connick Jr. on Tuesday’s episode of the talk show. “It was just she and I in the room and I said, ‘I know your life is going to change, but always know, no matter where you are, I will always be your loving fake father.’”

They may be close, but Pierce knows closeness doesn’t guarantee an invitation to a royal wedding. When Connick Jr., asked Pierce whether he would attend the ceremony, he admitted that didn’t know, but confessed, “I hope so.”

Markle’s Suits fiancé is also supportive of Markle’s romance. When the news of Markle’s royal engagement broke, Patrick J. Adams, who plays Mike Ross on the show, tweeting a fake bewildered message, “She said she was just going out to get some milk… ” 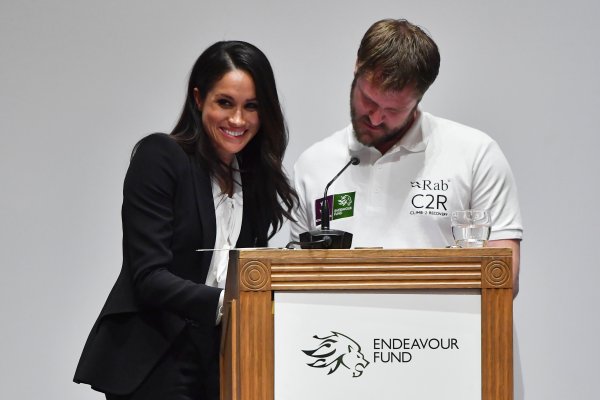 Meghan Markle's Loyal Subjects on the Internet Love How She Recovered From This Award Show Mix-Up
Next Up: Editor's Pick