There's a Norovirus Outbreak at the Winter Olympics

South Korean soldiers inspect a visitor at a security checkpoint as they replace security guards showing symptoms of the norovirus at the Gangneung Ice Arena in Gangneung on February 6, 2018 ahead of the Pyeongchang 2018 Winter Olympic Games. According to officials at Korea Centers for Disease Control and Prevention and the PyeongChang Organizing Committee, three out of 41 guards who suffered from diarrhea and vomiting were diagnosed with having the norovirus on February 5.
JUNG YEON-JE/AFP—Getty Images
By Flora Carr

A norovirus outbreak is sweeping through venues for the 2018 Winter Olympics in PyeongChang, South Korea – sidelining some 1,200 security guards and forcing the government to deploy the military ahead of the Olympics Opening Ceremony on Friday.

Many Olympic athletes, including some athletes from Team USA, have already arrived in PyeongChang. The first Winter Olympic events start Thursday.

South Korean soldiers inspect a visitor at a security checkpoint as they replace security guards showing symptoms of the norovirus at the Gangneung Ice Arena in Gangneung on February 6, 2018 ahead of the PyeongChang 2018 Winter Olympic Games.
JUNG YEON-JE—AFP/Getty Images

“The military personnel … will be responsible for security checks of the 20 venues as they take up jobs such as security searches, previously done by civilian safety personnel, until the patients’ condition is normalized,” a statement on the norovirus outbreak from the South Korean Olympic committee said.

All Olympic accommodations and buses will be disinfected, the organizers added. Health officials are also testing water and food for norovirus.

The Korean Center for Disease Control and Prevention (KCDC) said in a statement that they had dispatched “an immediate response team to the PyeongChang site to check additional people for symptoms of norovirus, check the origin of the exposure, take measures to control infection and prevent spread.” 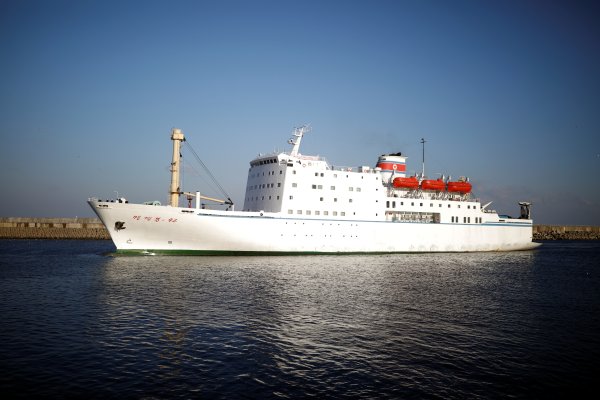 North Korea's Once-Nefarious Ferry Sails South for the Olympics
Next Up: Editor's Pick