8 Olympic Ice Skating Pairs Who Are Couples in Real Life

The Winter Olympic games in PyeongChang, South Korea, will be an extravaganza of cold weather sports, over which the real-life couples of ice skating will arguably take the center stage. After all, what’s not to love about some sizzling chemistry coupled with elegant choreography and of course bedazzled costumes?

Chalk it up to the cozy moves or the sparks flying between partners that we’ve come to expect from couples on the ice, but there’s something undeniably romantic about a duo that skates in tandem with one another. So perhaps it should come as no surprise that many of the figure skating and ice dancing pairs at the 2018 Winter Olympics are couples both on and off the ice — after all, partners that skate together, stay together. With that in mind, here’s a look at the eight real-life couples who will bring the heat on the ice rink at Pyeongchang this year.

Team USA’s only figure skating pair this year, Alexa Scimeca Knierem and Chris Knierem will be the first married U.S. couple to go to the games in 20 years, according to NBC. According to an interview with Cosmopolitan, the couple, who tied the knot in 2016 in a ceremony officiated by their coach, Dalilah Sappenfield, first met after Chris’s mom had asked Alexa to skate with him; while Alexa initially turned them down, she changed her mind after seeing him at competitions. The pair’s skating game has only improved since they became a couple; said Chris in the above interview: “I think the difference between us and any other team is that we can make people feel something when we skate,” he said. “We’ve been told a lot of different times that people felt the emotions we’re trying to portray when we skate together. I think that’s our biggest asset — we can still make someone in the audience feel something when were skating and feel that it’s real. Not that we’re acting.”

Although Madison Chock and Evan Bates have been skating together for years — the pair grew up skating together as kids in the relatively small skate scene in Michigan and Evan actually took out Madison on their first date for her 16th birthday — the duo weren’t a couple on or off the ice in the beginning of their careers. Both skated with other partners beforehand but what will make this Olympics even more special is that this will be the first games that the pair will be competing as a real-life couple. In an interview with NBC, Evan shared that he thinks this Olympics will be momentous for the both of them. “Being a couple off the ice, I think the experience will be a lot more personal together,” he said.

While Madison Hubbell and Zach Donohue are no longer together, the pair dated for two-and-a-half years despite initially not liking one another as partners on the ice. Ahead of the intense preparation for the 2018 Winter Games, the ice dancing pair decided it was best to split up. In an interview with Team USA, Zach explained it like this: “To work harder and do all of these things right, we just realized that to date and be with each other 24-7 with our particular personalities was just explosive,” Hubbell said, “and we weren’t able to keep our focus where it needed to be. We had to ask ourselves what was more important, our on-ice partnership or our off-ice relationship? And we were both very clearly said the on-ice partnership is No. 1.” Luckily for them, however, they’re dating other skaters. And both couples live and train together in the same house. Madison resides with Spain’s Adrian Diaz in Montreal, and Zach lives with Olivia Smart.

The British pair are a couple on and off the ice and have been skating together since 2005. According to Shape, Nick said that their relationship has helped the couple focus on their goals as competitors. “We started dating after we began skating together, and it works really well because we have the same goals and aspirations,” he said. “People are surprised because we work and live together, but we get on so well it makes training so easy.”

Anna Cappellini and Ondrej Hotarek’s relationship isn’t your typical figure skating couple’s love story. The pair are both ice skaters, but compete separately; Ondrej, who was born in the Czech Republic, now skates for Italy alongside partner Valentina Marchei, while Anna skates with Luca Lanotte; both will be competing for Italy at Pyeongchang, although Ondrej and Valentina will be performing in figure skating pairs while Anna and Luca will compete in ice dancing. The couple, who married in 2015, prefer not to work together. In a video for the Olympics, Anna explained it thusly: “Luckily, we’ve never had to work together because the few experiences we’ve had weren’t really plain sailing…I think the right balance is that we each do our own thing,” she said.” Ondrej agreed: “It’s best we do other things together rather than skating.”

The Russian couple began skating together in 2012 but later became involved with each other romantically. In an interview with Golden Skate, Evgenia said that it was sometimes hard to separate their work and private lives.

This ambitious French pair skated with other partners before finding each other in 2014, something that turned out to be fortuitous for their personal lives as well, with the two of them becoming a couple before long. By the end of 2015, the duo had tied the knot — an amazing feat since both revealed in an interview with Golden Skate that neither ever wanted to date their partner on the ice. “Truly, in the beginning, I had a barrier to overcome,” said Marie-Jade Lauriault. “But love was stronger.” She was born in Canada, but became a French citizen in December 2017.

Although Miriam Ziegler began her career as a solo skater, she is now a pairs skater with her boyfriend in real life, Severin Kiefer. In an interview with Skate Guard, Ziegler shared that her ideal day included ordering pizza for a night in of watching movies with Severin. 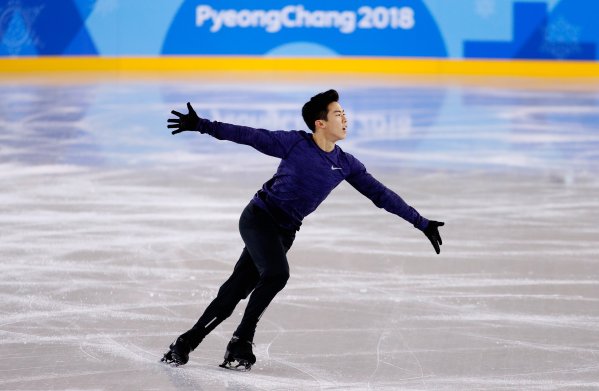 How Nathan Chen Became America's Greatest Hope for Figure Skating Glory at the PyeongChang Winter Olympics
Next Up: Editor's Pick