Francisco Cantú graduated college and joined the U.S. Border Patrol, where he and his partners learned to track other humans under blistering sun and through frigid nights. Those they found alive they had to bring to headquarters for processing and “voluntary” deportation. Cantú had taken the job thinking he could be a humanizing presence, but was ill-prepared for the nightmares that would ensue, events so terrifying that they eventually forced a reckoning that made him quit the Patrol. In his memoir The Line Becomes a River, Cantú grapples with some of the largest political and social questions facing the U.S. today through intimate stories of his encounters with those who set out on a perilous crossing from Mexico. This story took place in 2009, toward the start of Cantú’s Border Patrol career.

After three months we were finally released from the training unit and dispersed into rotating shifts to work under journeymen agents. I was sent to midnights and partnered with Mortenson, a four-year veteran of the patrol. I’ll tell you what, Mortenson said to me on our first shift together, it throws me for a loop every time they assign me to be a journeyman. Seems like just yesterday I was a trainee myself. My first journeyman was salty as sh-t, Mortenson scoffed. He kept going on about the “old patrol” and the “new patrol,” about how nobody with less than eight years in the field should be a journeyman. But that was before the big hiring push — there’s so many people coming in and out of the sta­tion nowadays that even junior agents move up fast. Mortenson smiled. So here I am, your very own journeyman.

Listen, don’t worry about calling me sir or any of that bullsh-t. He looked over at me as he drove us down the highway. My old man is the hardest-ass cop you’ll ever meet, made me call him sir ever since I can remember. Sh-t, I’m 23 years old and all I’ve ever known is law enforcement. Mortenson stared out into the darkness beyond his headlights. What about you? he asked. I’m 23 too, I told him. Well there you go, he said, the last thing I need is a dude my own age calling me sir. But hell, he smirked, I’ll let you wash the ride at the end of the shift.

Early one morning, before dawn, Mortenson brought me to the port of entry. It’s smart to make friends with the customs agents, he told me — they keep their eye on the foot traffic and the vehicles that cross through the port, and we take care of everything in between. If you get these guys to like you, sometimes they’ll throw you some good intel. He introduced me to a supervisor and got permission for us to monitor the video feeds in the camera room. For nearly an hour we watched a grid of dimly lit buildings and roads surround­ing the port until the sun slowly began to rise outside, bleeding warmth onto the screens. Mortenson pointed toward a monitor in the far-left corner and we watched as the pixelated figures of two men and a woman cut a hole in the pedestrian fence. We bolted from the room and ran to the site of the breach, rounding the corner just in time to see the men already scrambling back through the hole to Mexico. The woman stood motionless beside the fence, too scared to run.

As Mortenson inspected the breach, the girl wept beside me, telling me it was her birthday, that she was turning 23, pleading for me to let her go and swearing she would never cross again. Mortenson turned and took a long look at the woman and laughed. I booked her last week, he said. She spoke hurriedly to us as we walked back to the port of entry and while Mortenson went inside to gather our things I stood with her in the parking lot. She told me she was from Guadalajara, that she had some problems there, that she had already tried four times to cross. She swore to me that she would stay in Mexico for good this time, that she would fi­nally go back to finish music school. Te lo juro, she said. She looked at me and smiled. Someday I’m going to be a singer, you know. I believe it, I said, smiling back. She told me that she thought I was nice, and before Mortenson returned from the port she snuck her counterfeit green card into my hand. I don’t want to get in trouble at the processing center like last time, she said. I looked toward the port of entry and slipped the card into my pocket. When Mortenson came back we helped her into the patrol vehicle and drove north toward the station, laughing and applauding as she sang “Bidi Bidi Bom Bom” to us from the backseat. She’s going to be a singer, I told Mortenson. The woman beamed. Sh-t, he said. She already is. 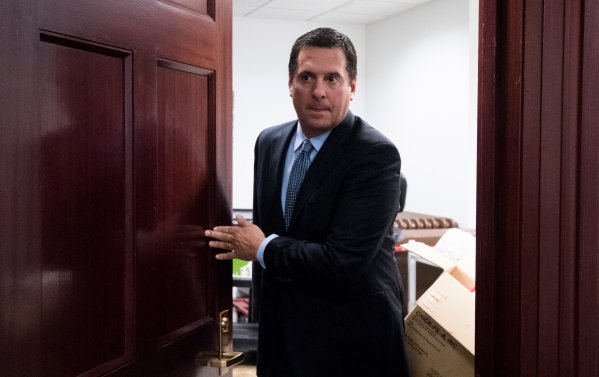 The Nunes Memo Attacks the Legitimacy of the Foreign Intelligence Surveillance Court. It Should Act to Repair the Damage
Next Up: Editor's Pick