27 Underrated U.S. Destinations Everyone Should Visit in Their Lifetime

If you’re traveling in the US, cities like New York, Los Angeles, and Chicago are probably on the top of your list of places to see. Outside of big cities, however, there are also tons of smaller, underrated destinations that are totally worth a trip.

We asked our colleagues for their favorite, off-the-beaten-path spots, and did research on under-the-radar gems to come up with a list spanning everything from little-known tropical islands to underexposed national parks and secluded beaches.

Letchworth State Park is a 14,427-acre state park in New York state that is also known as the “Grand Canyon of the East.” The park’s most striking features are its three large waterfalls on the Genesee River, which winds through the park in a gorge so deep its sides can rise up to 600 feet (hence the Grand Canyon nickname).

This tiny island of off Puerto Rico has stunningly white beaches and turquoise waters — but a fraction of the tourists you’d find in San Juan or nearby Vieques. This under-the-radar gem is still mostly locals-only, with only a minimal amount of bars and restaurants that may or may not run out of food and booze on any given day.

Read more: 25 must-see US attractions to visit in your lifetime

A small town in northern Florida, St. Augustine claims to be the oldest city in the US, dating back to 1565. Its Spanish architecture is stunning: the Castillo de San Marcos, a 17th-century stone fortress, is a must-see.

St. Augustine is also home to one of state’s most haunted spots, the Old St. Johns County Jail, which dates back to 1891. Today, you can go on a tour of the now-defunct jail that’s said to be haunted by former inmates.

This alien-looking rock formation is 1,267 feet tall, and was fittingly the site of alien thriller “Close Encounters of the Third Kind.”

While super remote, it’s a great side-trip if you’re on a road trip to Mount Rushmore. Because it’s so far off the beaten path, there’s plenty of room for camping. Even better, there are nightly screenings of the movie — extra special considering you’re in the shadow of the famous natural monolith.

Besides being ruggedly beautiful, all of the Oregon coast is public land (the public has free and uninterrupted use of Oregon’s 363 miles of coastline), meaning that you can basically park your car anywhere and walk to the beach. Beach camping, while not exactly encouraged, is also not prohibited in most places.

Albuquerque, New Mexico, has plenty of unique activities for every type of traveler. From breweries and cafés to galleries showcasing local artists, there’s plenty to see in this southwestern city.

Plus, every autumn the city holds the Albuquerque International Balloon Fiesta, a stunning festival where over 500 hot air balloons fill the sky.

Death Valley National Park in California is the “hottest, driest, and lowest national park” in the US according to National Parks Services, and it features stunning, otherwordly rock formations.

Orcas Island is part of the San Juan Islands off the coast of Bellingham. From the lush forests and breathtaking waterfalls of Moran State Park to the quaint lighthouses on the coast, this island is basically one big photo op.

While Texas officially has eight recognized wine growing regions, Texas Hill Country is a standout, as it produces world-class wines like Cabernets and Tempranillos from grape varieties you would usually find in places like Spain, southern France, and Italy.

In fact, Texas Hill Country sits on nine million acres, stretching across 25 counties. The Lone Star state is said to be one of the fastest-growing wine regions in the country, and the area itself has become one of the fastest growing tourist destinations. It’s not surprising, then, that Lonely Planet named it one of the best places in the US to visit last year.

A barrier island shared between Maryland and Virginia, Assateague Island is famous for its 300+ wild, beach-loving horses. Local folklore says a shipwreck during the colonial era brought the horses to Assateague, although no one knows for certain.

You can also go kayaking, take a sightseeing cruise, or just sit back and marvel at the wildlife.

The Apsotle islands — 21 islands in Lake Superior— have beaches, lighthouses, and shipwrecks to keep visitors busy.

In the summer, they beckon with crystal clear waters and sea caves to explore by kayaking, diving, or hiking.

But the winter is no less stunning, as the islands, which boast some of the most unusual rock formations in the country, freeze over to create an incredible winter wonderland.

Read more: The 16 most overrated spring break destinations — and where to go instead

Many people head to Arizona to see the Grand Canyon, but instead of battling crowds and paying astronomical hotel prices, head to Sedona, Arizona.

From a yoga festival to a one celebrating vegetarian- and veganism, Sedona is perfect for an active yet peaceful getaway.

And besides beautiful scenery, Sedona is also said to be home to a healing energy vortex, which is known to promote spiritual development.

From taking a scenic boat ride along the San Antonio Riverwalk to exploring the Alamo, there’s something for every type of traveler in this 300-year-old city.

While San Antonio is filled with history, there are also plenty of trendy shops, restaurants, and art galleries to keep you busy.

Less than 30 minutes from San Francisco is a largely unknown stretch of stunning wilderness called the Tennessee Valley. There are tons of hiking and biking trails, horse stables, a native-plant nursery, and, best of all the tranquil Tennessee Cove and its beach.

Boulder, Colorado, was named the happiest city in the US last year by National Geographic. It’s no wonder, considering that the college town, home to the University of Colorado Boulder, has the perfect combination of outdoor activities, restaurants, and shopping.

“The City of Fountains” is well-known for, well, its many beautiful fountains. It’s also famous for its delicious barbecue and its jazz heritage. Exploring the American Jazz Museum and hitting up local jazz bars and breweries is a must, as is checking out the Negro Leagues Baseball Museum and catching a Kansas City Royals baseball game.

Forget more popular cities like Nashville or Charleston — Asheville, North Carolina, is an underrated gem if you’re looking to explore the southern region of the US.

Asheville was ranked the number one US city by Lonely Planet in 2016, although it’s still an under-the-radar spot when it comes to tourism. Visit the historic Biltmore Estate, which includes the largest privately-owned home in the US and stunning architecture.

There are beautiful national parks all over the US, but Glacier National Park in Montana is worth putting at the top of your list.

Located in northern Montana near the Canadian border, the park has over 700 miles of hiking trails waiting to be explored. From glaciers and lakes to alpine meadows, Glacier National Park is the perfect place for an active vacation if you love the outdoors.

If you think you have to travel to some faraway place for a relaxing island getaway, think again. Mackinac Island is a small yet beautiful island off the coast of the northern tip of Michigan.

The charming island town is perfect for outdoorsy vacationers who love to spend time swimming, biking, and boating. It’s also home to one of the oldest hotels in the entire state, the Island House Hotel.

Far less crowded than its more well-known LA counterparts, this beach is secluded, quiet, and arguably one of the most beautiful beaches in the entire country. In fact, it’s a favorite amongst photographers thanks to its craggy cliffs and crashing waves, so don’t be suprised if you walk in on a photoshoot.

Right off the Pacific Coast Highway, the rugged beach is the perfect pit stop to shake out weary legs.

Tourists flock to Philadelphia for its rich history, although Pittsburgh is another Pennsylvania city worth visiting.

Pittsburgh has something for everyone, whether you’re into sports, art, or food. Catch a Steelers or Pirates game to familiarize yourself with the local sports culture, or visit the Andy Warhol Museum, which houses some of the Pittsburgh-native’s most iconic pieces.

Located on the same parallel as Burgundy and Bordeaux in France, this area produces similar wines, but much cheaper. While the region, which ranks 13th in US wine production, became internationally known for its white wines, like Chardonnay and Pinot Grigio, it’s increasingly becoming known for its French-style reds like Pinot Noir, Cabernet Franc, and Merlot.

In the summer, the Cherry Festival is a must-visit (the city is the largest producer of tart cherries in the US), while the winter allows for skiing and snowboarding.

Portland, Maine, made it into the top 25 happiest cities in the US this year, thanks to its “walkability, access to nature, and civic engagement,” according to National Geographic.

It’s a perfectly manageable city to explore if you want to get a taste of New England charm. Walk around the cobblestone streets of the Old Port district to explore the local shops and restaurants.

There’s no better place to take in the beauty of the Great Smoky Mountains than Gatlinburg, Tennessee.

The resort town boasts Tennessee’s only ski resort, as well as several museums and its own 32-story Space Needle.

Want to visit Joshua Tree? Instead of heading to crowded and pricey Palm Springs check out Twentynine Palms, a quirky town filled with quirky establishments, like the historic, hippie compound-esque 29 Palms Inn, which was established in 1928.

The city, located in the Mojave Desert, is on the northern side of the Joshua Tree National Park, even including one of the park’s entrances.

Read more: The best place to visit every month this year

Burlington, Vermont, is a charming college town that’s beautiful year-round. Fall is the perfect time to take in the stunning Vermont foliage while the summertime means boating and water sports on Lake Champlain.

From exploring shops showcasing local artists in the downtown area to taking in the beauty of the lake and harbor, Burlington should be your next East Coast destination. 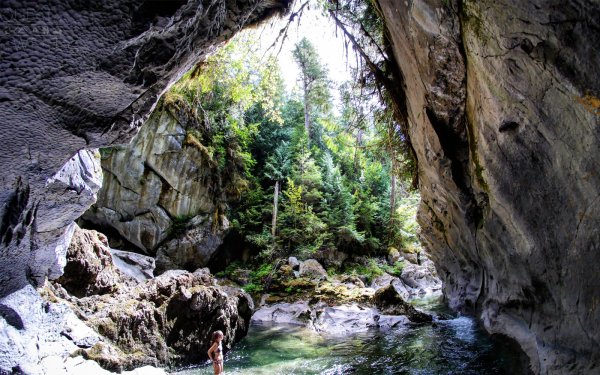 25 Must-See Destinations, According to a Man Who Took a 22,000-Mile Road Trip
Next Up: Editor's Pick