The earliest English, French, and American valentines were little more than a few lines of verse handwritten on a sheet of paper, but as of the 18th century their makers began to embellish them with pictures as well. Hearts, birds, flowers, and leaves were drawn or painted on handmade valentines, which were then folded, sealed with wax, and placed on a lady’s doorstep. Some contained complicated puzzles, acrostics, and rebuses (pictures that represent words or parts of words). The Pennsylvania Dutch created highly artistic valentines in either German or English.

The first commercial valentines appeared in England at the very end of the 18th century. These “mechanical” valentines were printed, engraved, or made from woodcuts and sometimes colored by hand. They combined traditional symbols of love—flowers, hearts, cupids, birds—with doggerel verse of the “roses are red” variety.

Individuals who continued to make their own valentines or wanted to add a personal touch to a machine-made card could find help in pamphlets designed for the poetically challenged. In 1797 The Young Man’s Valentine appeared in Britain, and thereafter, throughout the 19th century in England and America, other manuals followed, with such titles as Saint Valentine’s Sentimental Writer and Introductory Treatise on the Composition of a Valentine by a Master of Hearts.

The self-styled Master of Hearts let it be known that he was appalled by the “trashy . . . coarse and sometimes disgusting productions which soon after Christmas, begin annually to people the hucksters’ shop windows, in the shape of penny Valentines.” As a remedy he proposed that the lovestruck write their own valentines—a task to be undertaken with his help. As he put it, “in writing a Valentine, the very best way of all is to write an original one . . . nothing can be so telling or so pungent as an immediate emanation from your own heart.” Even if the valentine was only a copy of his text or a rearrangement of his words, writing with one’s own pen was generally considered more personal and more authentic than sending a commercial card.

Some guides were written specifically for women, such as The Lady’s Own Valentine Writer. An 1848 publication titled People’s Valentine Writer, by a Literary Lady may well have been written by a woman, though one can’t be sure, as sometimes men published under the assumption that a female author, even an anonymous one, would appeal to women.

That same year, on February 17, the 18-year-old American poet Emily Dickinson wrote to her brother, Austin Dickinson, from her room at the Mount Holyoke Female Seminary that she would not forget the fun she had had during “Valentine week.” Though she herself had not received any valentines and was still longing for one, many of the other girls had. As a group they managed to send out 150 valentines, despite an interdiction by the Holyoke faculty. Emily remarked that one instructor in particular was adamant: “Monday afternoon, Mistress Lyon arose in the hall and forbade our sending ‘any of those foolish notes called valentines.’”

Such a negative attitude did not discourage another Mount Holyoke graduate, class of 1847, from entering into the valentine business. Esther Howland of Worcester, Mass., wanted to produce quality cards constructed according to her own design—cards that would raise the artistic level of the genre through the use of embossed and colored papers. Within three years the top floor of the Howlands’ spacious house owned by Esther’s father had been converted into a factory where girls assembled valentines under Esther’s direction. After she had made the initial mock-up, each working girl had a specific task, such as laying out the background or cutting out paper pictures to be pasted on by a third girl. Howland’s exquisite, three-dimensional valentines were minor works of art, comparable to fine embroidery or complex collages. They sold for no less than $5 each and, in toto, filled the Howland coffers with as much as $100,000 in a single year!

While Howland’s cards favored cupids, flowers, human figures, and birds rather than hearts, the heart icon appeared on many other valentines manufactured elsewhere. One titled “Cupid in Ambush” pictured Cupid aiming his arrow at a winged heart in the sky. The verses on the card read, “MY FLUTTERING HEART / DOTH FEEL LOVE’S SMART.”

With the Industrial Revolution in full swing, mass-produced Valentine’s Day cards all but obliterated the handmade variety. In 1879, when George C. Whitney bought out the Howland business, he brought in printing presses and cheap paper to reduce costs. His valentines often featured hearts or were themselves heart shaped, just as his Christmas cards often depicted or took the shape of Christmas trees. In time Whitney became the biggest producer of American valentines.

In the Anglo-Saxon world Victorian valentines varied greatly in price and quality, ranging from cheap paper cutouts to expensive lithographs on embossed paper. There were specialized cards for different trades and professions—for example, a series of valentines for sailors, which portrayed ships at sea and sweethearts waiting for their return: “For she who inclines to a sailor’s own heart, / In the gale of adversity—never will part.”

One could also buy comic valentines that conveyed a message of derision rather than love: these mean-spirited “vinegar” valentines made fun of skinny spinsters, fat bachelors, female bluestockings, male dandies, alcoholics, overbearing wives, or anyone else you wanted to ridicule. In the United States lower-class minorities including the Irish or free “negroes” were often the targets of such insulting valentines. Printed on single sheets and priced cheaply, at between one and five cents, they were usually sent anonymously.

But the overwhelming majority of valentines remained sentimental and carried a romantic message. Some of the fanciest contained a piece of real lace or an actual lock of hair. Even the blind were not forgotten; Braille valentines offered embossed figures of birds and hearts accompanying the verse.

Today approximately 200 million paper valentines are sent in the United States alone, and the rise of e-cards increases that number beyond estimate. Hearts still make their appearance on both paper and e-cards, but they have rivals in images of flowers, loving couples, and, surprisingly, animals. Yes, cuddly animals seem to be the rage in today’s valentine cards, especially those destined for children, who constitute a large portion of American recipients.

Even though the sale of all American greeting cards has declined considerably during the last few years, the valentine is holding its own. Saint Valentine, whose name is now equated with a greeting card, could take some comfort in knowing that he has sweetened the union of countless loving couples.

Adapted with permission from The Amorous Heart: An Unconventional History of Love by Marilyn Yalom, available now from Basic Books. 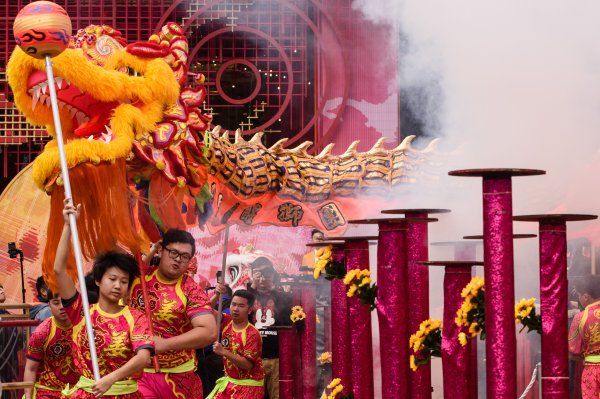 Chinese New Year 2019: Stay Lucky During the Year of the Pig
Next Up: Editor's Pick