'We're Ready, if Our Nation Calls.' A Top U.S. Navy Commander in the Pacific on China, North Korea and More

It’s a tough job at a tense time in the Asia Pacific. The Trump administration is zeroing in on strategic competition from what it calls “revisionist powers” China and Russia, while North Korea poses an escalating threat to the U.S. and its regional allies.

Even as demands increased, the Navy faced its own tragedies last year, when two warship collisions resulted in the deaths of 17 sailors and an estimated $500 million in damages. Investigators determined that the accidents involving the USS Fitzgerald and the USS John McCain, both Arleigh Burke-class destroyers, were preventable. Sawyer assumed command after his predecessor was dismissed in the wake of the collisions.

In late January, TIME traveled to the 7th Fleet’s headquarters in Yokosuka, near the outskirts of Tokyo, to speak with Sawyer about the Navy’s combat credibility and the challenges waiting on the Pacific horizon.

What is the immediate challenge you face now that you’ve taken on the job?

Since the 1990s, our number of operational units has gone steadily down while our operational demand signal has increased. So our job at large is to be able to prioritize what we can do based on the supply of people and ships that I have. There is an insatiable demand for the United States military, and in my case the U.S. Navy. People, organizations will always want more than we can provide, that’s just a fact of life.

When we talk about strategic waterways around here, this is what we’ve been doing for decades. I would argue that economic development out here in the Pacific has been largely underwritten by the U.S. Navy. We have been able to provide regional stability and security since the end of World War II, and that security and stability has enabled the countries out here to focus internally on their own economic and populace development. We have many alliances and many partners out here and that’s a good spot to be in.

Are those alliances as strong as they used to be?

I look at this from a purely Naval standpoint. When we talk about alliances, we’re talking about Navy-to-Navy engagement with our allies — South Korea, Japan, the Philippines, Thailand and Australia. We have a very, very robust working relationship and exercise relationship with those countries. So from my viewpoint as a Naval officer, I think those alliances continue and they get better and better. There’s always gonna be some twists and turns in any relationship. But from my viewpoint I consider them strong allies. It’s where our objectives overlap that strengthen us and allow us to work together.

Can you keep the South China Sea free and open?

In the foreseeable future I don’t see the sea-lanes closing down. It’s not just about our interests — you’ve got Vietnam, Thailand, all the ASEAN countries, we all have the same stake in this — the amount of merchandise, global trade, commerce that goes through there is huge. So I don’t see anybody trying to close down the South China Sea. Many of our actions there are in furtherance of international norms, standards and laws. That’s why we continue to sail, fly and operate everywhere international law allows. So I don’t even see that as a possibility that the South China Sea would be closed to free trade.

The National Defense Strategy that came out recently talks about China being a strategic competitor. I think it’s important to recognize that the military is just one part of government. You’ve got diplomatic, economic and other aspects of our government that come into play throughout the world. I think those aspects are equally if not more important on a day-to-day basis than the military. I provide space and options for our leadership well before they want to call me in. I recognize there have been territorial issues in the South China Sea that many would argue are not in compliance with international law. That’s a valid description. But I don’t see anyone trying to close down the international waterways as we see them.

Read more: Inside the International Contest Over the Most Important Waterway In the World

How concerned are you about Chinese militarization in the South China Sea?

Well, I think even [Chinese President] Xi Jinping said they were not going to militarize these islands on the South China Sea. He said it on the South Lawn of the White House, if I’m not mistaken.

We do see progress being made, buildings being constructed and other things. They’ve come out and said what they will not do, so at the government level we need to check their homework and make sure they abide by their commitments.

What can you do if they don’t abide by those commitments?

We want to resolve these issues diplomatically. I’d push that to the State Department and see what they could do. From a military standpoint, I’m a hammer if you’ve got a nail. I’m one tool, but there are many that can be used before you want to use the hammer. We’re not even close to a conflict out here, in particular with China. They don’t want to go to war with me, and the United States doesn’t want to go to war with China. That said, my job is to be ready with whatever our government needs.

What are the lessons to be learned from the two tragic collisions last year?

I think it’s important to recognize that the accidents, while they were tragic, were also preventable. We should not forget as we move forward that we lost 17 sailors’ lives, and that’s one of the motivators for getting things right. As a military leader, the treasures we have are the sons and daughters, mothers and fathers, the nieces and nephews of the American populace. There’s a covenant; families provide their treasure to us as a military, and our job is to defend the homeland and to make sure we take care of the people that are entrusted to us. That’s critically important.

We didn’t get here overnight, therefore the important part is accurately identifying causes and the right corrective actions. What I’m doing with my team out here in the very near term on those things that I can uniquely control, is scheduling; making things deliberate and predictable, to make sure we carve out time for maintenance, training and certification.

In the event of war with North Korea, what’s the scale of conflict that you need to be prepared for?

My goal is to be ready for anything from a natural disaster like a typhoon, all the way to the highest end of kinetic warfare that you can envision. That’s what I’m paid for. If I don’t focus on the highest levels of warfare, you’re not getting your money’s worth out of me. By focusing on the highest levels, I can accomplish anything less than that. We’re ready, if our nation calls.

What would be the role of the 7th Fleet in nuclear warfare?

I don’t really have a role in nuclear conflict, which is up to Strategic Command in Nebraska and our leadership back in D.C. I don’t envision a nuclear conflict at any time in the foreseeable future. I just don’t think that’s a plausible scenario.

When the false alarm was sent out in Hawaii, where were you and what went through your mind?

I was actually traveling that day to Hawaii. I found out just after the fact, I certainly understand the angst it caused.

If the alarm were real, what would have happened?

Well, without getting into classified information, there are procedures. Clearly, if the U.S. was attacked, it changes whatever I had planned to do that day. 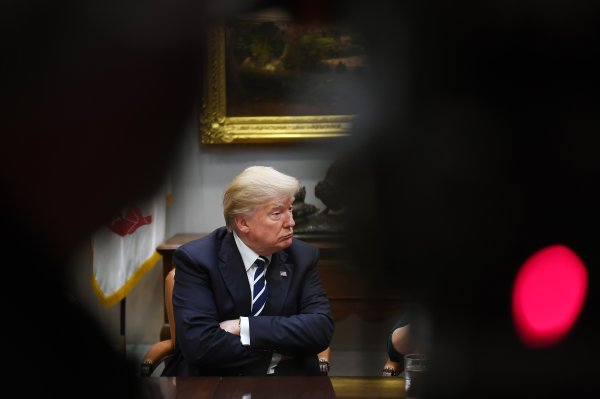 Nuclear Officers: Trump 'A Clear and Present Danger'
Next Up: Editor's Pick