How to Stay Lucky During the Chinese New Year

With Lunar New Year upon us, many celebrants are maximizing their chances for a prosperous year ahead — one that’s full of luck and good fortune.

Also known as Chinese New Year or Spring Festival, the New Year is China’s biggest and most important holiday. This year, it begins on Tuesday, Feb. 5 and lasts until Thursday, Feb. 7. It is also celebrated in Vietnam (where it is known as Tet), Korea (called Seollal) and by people of Chinese descent in Malaysia, Thailand, Indonesia and all over the world.

While Chinese New Year celebrations are known for the fireworks and food, the holiday is steeped in tradition and ceremony, with rituals invoking good luck and prosperity for the year ahead.

If you want to stay lucky this year, follow these Chinese traditions for the New Year.

Give your house a spring cleaning

In the run up to the Chinese New Year, it’s fortuitous to give your house a good clean. Decluttering and throwing away unwanted items gets rid of the stagnant energy that has accumulated during the previous year. But make sure to get the dusting done before the first day of Chinese New Year, as cleaning during the holiday brings bad luck according to old superstitions.

In Chinese culture, red is the color of happiness and celebration, and leading up to Chinese New Year, the color can be seen everywhere in Chinese cities: adorning doors, walls, office buildings and shopping malls. Hang red lanterns in your doorway, affix red cardboard decorations to your walls, and wear red to attract good energy.

Called hongbao in Mandarin, or lai see in Cantonese, these little red packets stuffed with cash are given to children, family, friends and employees during the Chinese New Year. But proper hongbao etiquette must be observed: the envelopes are usually given by married people or employers, the packet should contain new banknotes, the sum should be an even number, and never in denominations of four—because the Chinese word for four sounds like the word for death.

Red envelopes are also “fed” to the Chinese lions during traditional lion dances, which are popular during the Chinese New Year. Dance troupes visit offices and parade through the streets accompanied by a din of drums and firecrackers to clean away the energy of the old year and to manifest good energy for the next.

Fireworks are a Chinese New Year tradition that goes back thousands of years.

In Chinese lore, firecrackers were used to scare off the evil New Year spirit, Nian. On the first day of the New Year, the beast would wreak havoc in the villages.

One day, as the myth goes, an old man saved the villagers by telling them to put up red banners and bang drums to scare the Nian away. Today, those traditions can be seen in the red decorations and lion dances, but also in the form of firework displays. Fireworks are a huge part of New Year festivities, with impressive displays put on in major cities. A Chinese phrase for celebrating Chinese New Year is Guo Nian, literally, “overcome Nian,” or “the passing of the beast.”

Enjoy a feast with the family

Perhaps the most important part of the Chinese New Year is spending time with family. With schools and offices closed, hundreds of millions of people will make the trip to China or go on a trip. The annual travel rush is considered the largest movement of humans on Earth and about 3 billion trips are expected to be made between Jan. 21 and March 1.

Central to family time is the New Year feast, also known as the “reunion dinner.” Certain dishes are eaten for their symbolic meaning and some are part of traditions going back thousands of years. Though each household and region has its own traditions, there are some of the dishes that are considered essential.

Fish is a huge part of the reunion dinner as it symbolizes wealth. In Chinese, fish (yu) is a homonym of the word for “surplus” or “extra.” Spring rolls also symbolize prosperity as they are fancifully thought to look like little gold bars. They also take their name (chun juan) from the Spring Festival (chunjie) — Chinese New Year.

Dumplings are always served on New Year’s Eve, especially in the north, as they represent the transition from the old year to the new.

Noodles, because of their length, are playfully said to signify a long life. A traditional (and fun) dish to eat during the New Year are Longevity Noodles, also known as Changshou Mian. The noodles are commonly made from one piece of dough that’s stretched into many long strands. Eat them uncut and serve fried or with a broth.

In Singapore, a dish called yu sang (also known as yu sheng, lo hei and the prosperity toss) is a staple on the New Year’s dinner table. It’s a large platter full of carrots, radishes, pickles and raw fish. As the ingredients are added, diners will shout auspicious wishes for the year ahead.

In China’s south, niangao — a glutinous rice cake that’s eaten with stir-fried vegetables and meat, or as a dessert — is popular over the Chinese New Year. In Cantonese, the word sounds similar to the phrase “lofty year”— or a wish to achieve higher heights every year.

Mandarin oranges and tangerines can be seen on offer at market stalls all over China. Known as ‘Good Fortune Fruit,’ oranges are eaten during Chinese New Year to bring fullness and wealth. 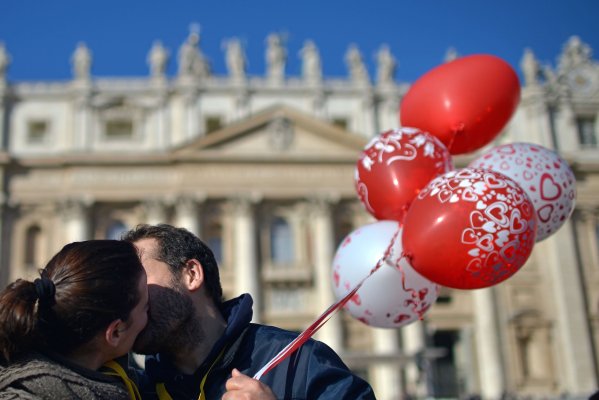 The Mysterious History of the Real Saint Behind Valentine's Day
Next Up: Editor's Pick