Natalie Portman once again eschewed her good girl image to transform into a foul-mouthed rap star for a sketch on Saturday Night Live, which she hosted this weekend.

In the digital short, “Natalie’s 2nd Rap,” the actress revives her rapper persona from her first SNL guest hosting gig in 2006.

And she doesn’t hold back.

Quickly morphing into a no-holds-barred entertainer with no patience for pleasantries, Portman, who also defends the Star Wars prequels in the clip, raps that “Tide Pods the only f–ing thing I snack on, black out and go motherf–ing Black Swan.”

Beck Bennett, who plays the nervous celebrity interviewer trying to get her to answer questions, is clearly intimidated by Portman. He doesn’t get off easy — Portman stabs him in the forehead with a “Time’s Up” pin when he tries to ask her about her involvement in the group’s effort to help support women in the fight against sexual assault and harassment.

A welcome appearance in the skit is former SNL cast member Andy Samberg, who also acted in the first sketch, this time dressed as a Viking who is trying to get Portman to pay attention to a younger Viking boy who seems like he may be their son.

But Portman the rapper has no time for family matters saying, “When I gave birth I didn’t even push / I was blazed out, smoking bomb kush.”

Both of the digital sketches were produced by comedy trio The Lonely Island, made up of comedians Andy Samberg, Akiva Schaffer and Jorma Taccone. 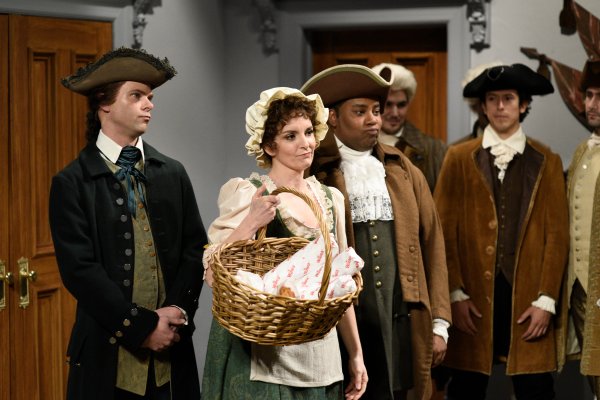